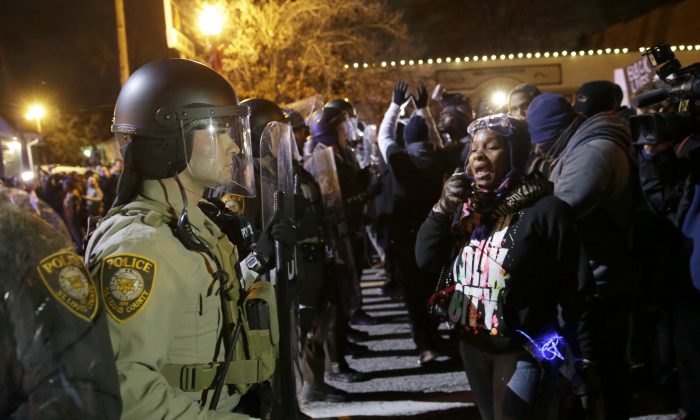 Police officers and protesters ready to react to the announcement of the grand jury decision not to indict police officer Darren Wilson in the fatal shooting of Michael Brown, an unarmed black 18-year-old, in Ferguson, Mo., on Nov. 24, 2014. (AP Photo/David Goldman)
Ferguson

Police Officer Darren Wilson will not face indictment in the killing of unarmed 18-year-old Michael Brown on Aug. 9. The shooting death of Brown, who was black, on the streets of Ferguson by a white police officer sparked a wave of protests in the St. Louis area that has continued for three months.

On Monday night, St. Louis County prosecutor Bob McCulloch announced the decision not to indict in a press conference at the Buzz Westfall Justice Center before the world’s media.

“My heart goes out to the family of that young man,” he said, speaking of Brown. “As tragic as this is, it was not a crime. It does not lessen the tragedy that this was not a crime, that it was self-defense.

Immediately after the decision was announced, President Barack Obama spoke to the nation in a televised address from the White House, “We are a nation built on the rule of law. And so we must accept that this decision was the grand jury’s to make.”

“Michael Brown’s parents have lost more than anyone. We should honor their wishes.” Obama said he joined Michael’s parents in wishing that anyone who protested the decision do so peacefully.

“The fact is in too many parts of this country a deep distrust exists between lawmakers and people of color…. This is not just an issue for Ferguson. This is an issue for America.”

Obama said he wants America to continue a conversation to heal the divisions in America. “We can’t just paper it over, because we do that, the anger builds up,” said Obama.

McCulloch said the grand jurors put their lives on hold and “put their hearts and souls” into the deliberations.

A reporter asked if police kill young black men with impunity, and if that is what protesters are trying to convey. McCulloch denied that and described the grand jury’s reasoning in detail.

McCulloch also criticized the news media and social media, saying the “most significant challenge of this information has been the 24-hour news cycle, followed closely by social media.”

“Many of the witnesses said they heard a gunshot while Mr. Brown was partly inside the vehicle,” said McCulloch. He went on to say that DNA and blood from Brown was found inside the car, supporting Wilson’s statement that Brown reached into the car and tried to take his gun.

Three autopsies found what was probably his first wound, a graze wound to his thumb, with powder residue. According to McCulloch, that wound may have come when Brown tried to take Wilson’s weapon.

The prosecutor described multiple inconsistent witness statements. An essential point he made was that the physical evidence was consistent, and supported the narrative by Wilson, that he fired in self-defense after Brown first tried to take his gun and then moved toward him outside the car. Wilson fired 12 rounds in all, according to McCulloch.

“I do want to say that during this extremely tense and painful time that we have had … we are all mindful that the world is watching us … I join with Michael Brown’s family in urging everyone to engage in this conversation in a constructive way.”

There have been widespread fears that the decision will set into motion large-scale protests both in the St. Louis suburb of Ferguson and across the country.

Hundreds of people massed around the St. Louis County Justice Center while McCulloch made the announcement. Small groups of police stood nearby, wearing riot gear and holding shields.

Protests in Ferguson in August veered into a wave of looting and violent exchanges between police and protesters at one point. Though things have been relatively calm since then, last week saw a string of arrests during late-night protests around the city.

The jury consisted of six white men, three white women, two black women, and one black man. At least nine of them had to agree in order for charges to be filed.

The grand jury testimony will be made public, according to McCulloch.

The only witnesses known to have testified are Wilson himself and Dr. Michael Baden, who performed a private autopsy on Brown on behalf of his family. But other witnesses and experts may also have appeared. Aside from his testimony, Wilson kept an extremely low profile in the past months as the public and media guessed at his whereabouts.

The greater St. Louis area was battened down in anticipation of the decision. Storefronts had boarded-up windows, and government buildings were cordoned off with barricades.

A local artist decorated boarded-up storefronts with large photos of raised, black hands, evoking reports that Brown had his hands up in surrender when he was killed. The facts of the brief, tragic encounter were in dispute, and “Hands up, don’t shoot,” became a slogan for the protesters.

On Monday Nov. 17, Missouri Gov. Jay Nixon had declared a state of emergency and activated the National Guard. On Monday, Nov. 24, he said in prepared remarks before the announcement that “our shared hope and expectation is that regardless of the decision, people on all sides show tolerance, mutual respect, and restraint.” Michael Brown’s parents issued a statement in which they said, “We are not here to be violent. We are here in memory of our son.”

St. Louis Alderman Antonio French sent a letter to the governor asking the state to provide 400 mental health counselors for residents, who he said were traumatized by the militarized response to the protests. St. Louis Mayor Francis Slay had asked for 400 National Guardsmen to deploy to his city in case of unrest when the grand jury announced its decision.

Nixon seemed to allude to French’s request when he stated, “Several churches will be providing safe havens throughout the area to provide food, shelter, and medical care. Mental health providers have teamed up to help ease the emotional strain these events have caused. These health professionals are working right now to provide counseling and other services to people who need them.”

Protests and vigils are planned throughout the country Monday and Tuesday, from Los Angeles to New York to Boston, Atlanta, Chicago, and Oakland.