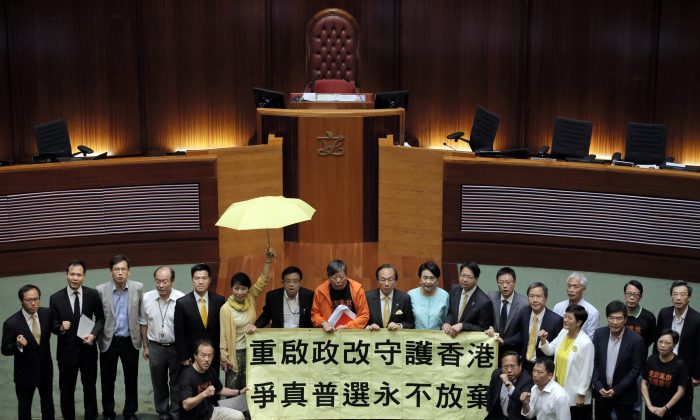 Pro-democracy lawmakers display a yellow umbrella and a banner stating "Reopen political reform to protect Hong Kong, never give up to fight for true universal suffrage" after 28 lawmakers voted against the election reforms proposals at the Legislative Council in Hong Kong, June 18, 2015. (AP Photo/Vincent Yu)
China

Lawmakers spent two days debating the proposal, which would have allowed Hong Kong citizens to vote for the top leader for the first time in 2017, but require that all candidates be approved by Beijing.

The crucial legislature vote ended in a confusing anticlimax when most pro-establishment lawmakers walked out moments before it began in what appeared to be a bungled attempt to delay the vote by depriving it of a quorum. The proposal was rejected after 28 lawmakers, all but one from pro-democracy parties, voted against it. Eight were in favor and 34 did not cast votes.

Even if the lawmakers had remained, the proposal would have been rejected because the government needed at least 47 of 70 votes for approval.

Outside the legislature, pro-democracy supporters cheered after hearing the result.

“This is the result that we want, so everyone is very happy,” said 19-year-old student Sylvia Leung.

The defeat marks the end of the territory’s most tumultuous year since Beijing took control in 1997. Known for being a stable and prosperous Asian financial center, Hong Kong has been hit by demonstrations—at times chaotic and unruly, but largely nonviolent and peaceful—since Beijing decreed last summer that it wanted elections to be restricted. Tens of thousands of people, most of them students, took to the streets in response, occupying busy thoroughfares in three neighborhoods for 11 weeks last autumn to protest what they called “fake democracy.”

The defeat raises the prospect of a political stalemate for years to come.

China’s faux legislature signaled its determination not to back down from its August decision despite the veto.

“Its legal force is unquestionable,” the Standing Committee of the National People’s Congress said in a statement, according to regime mouthpiece Xinhua news agency.

Hong Kong Chief Secretary Carrie Lam told lawmakers just before the vote that she was “sad and disappointed” knowing that the proposal would be defeated.

“I don’t know when democratization can be taken forward,” she said. Hong Kong and Beijing officials have said that in the event of a defeat, leaders would continue to be handpicked by a 1,200-member panel of local elites.

Hong Kong is a former British colony that retains its own legal and financial system and civil liberties such as freedom of speech not seen on the mainland. Even during colonial times, residents were unable to choose their leader, then known as the governor, who was dispatched from London.

Hong Kong’s unpopular current leader, Chief Executive Leung Chun-ying, said he was “disappointed” with the defeat and signaled that his administration would not attempt to restart democratic development during the two years remaining in his term.

“It’s time for the community to move on,” Leung told reporters. “In the coming two years, the Hong Kong government will focus efforts on the various economic development and livelihood issues.”

“Today is not the end of the democracy movement,” said lawmaker Alan Leong. “Quite the contrary, this is the starting point of another wave of democratic movement.”

“One person, one vote becomes a phantom with the opposition of the pro-democracy legislators,” the nationalist tabloid Global Times opined. “History will not judge what they did today to be glorious.”

Authorities are blaming the opposition in an attempt to punish them at upcoming local and legislature elections this year and next, said Joseph Cheng, a political scientist at City University of Hong Kong.

“The confrontation will continue until after these two elections at the very least,” he said.

After two days of heated discussion, the debate came to a bizarre end when some pro-establishment lawmakers walked out moments before the vote, despite being denied a request for a 15-minute break.

Pro-establishment parties hold more than half the seats but some representatives remained inside amid the confusion. They said they weren’t told of any decision to leave.

Lawmaker Jeffrey Lam said they wanted to wait for 79-year-old member Lau Wong-fat, who was ill, to return to the council chamber so he could vote.

“Unfortunately, there were some communication problems with some representatives, so they didn’t leave the chamber,” he said.