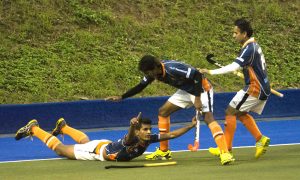 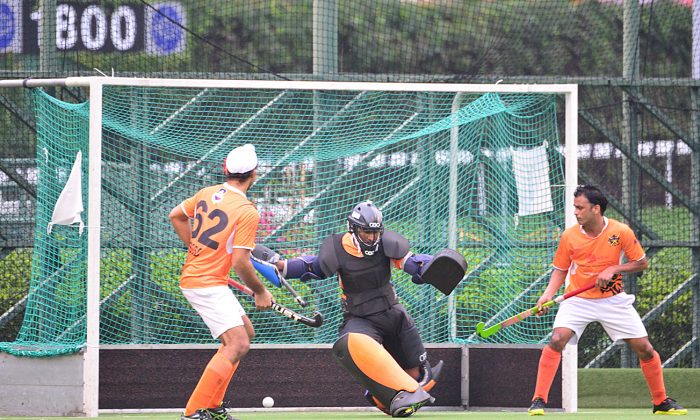 Unstoppable: SSSC-A keeper Gurdev Singh, who was voted ‘Man of the Match’ watches in vain as Khalsa-A’s player/coach buries his penalty corner to hand Khalsa-A a 2-1 victory in the Guru Nanak Cup final, at Happy Valley on Sunday Dec 13, 2015. (Eddie So)
HK Hockey

HONG KONG—SSSC-A goalkeeper Gurdev Singh was crowned ‘man-of-the-match’ for his brilliant performance between the post but his acrobatic skills still failed to halt Khalsa-A from leaving Happy Valley with the 49th edition of the Guru Nanak Cup after they edged out their rivals 2-1 last Sunday Dec 13, 2015.

Singh who normally plays for this C-team as a left winger was called into action when their regular keeper Gurdeep Singh was unavailable and he ably proved he was up for the job with some fantastic saves which even Khalsa player/coach Arif Ali had to heap praise on his rival’s last minute replacement in his debut game as a blocker.

“Their goalkeeper (Gurdev) did well and made our job difficult at times,” said Arif, who eventually bagged the winning goal a minute from the end, with a trademark penalty corner conversion, this time a low but powerful drive instead of his high corner drag flicks.

Both sides had entered the final after finishing even with each side having bagged three wins in the single round-robin format including a 1-1 draw against each other in their preliminary round. Thus reminding the spectators on hand that they were in for a thriller in what was going to be a gritty and enticing final. This was especially so as Khalsa had beaten SSSC-A less than a week ago in a Premier top of the table clash and they were not disappointed as both sides played true to form.

SSSC-A skipper Mandeep Singh, was philosophical of their defeat saying someone had to lose.

“That’s part of the game but it’s hard to come back into a game when you concede goals in short games like this,” he said, while praising left-winger Kulwinder Singh who opened their account in a match played at a fast and furious pace by both sides.

Ali was of the same opinion as he said their victory over SSSC-A relied on their follow up from their Premier League clash last week.

“It’s all about confidence and that was the difference between us and it was our win from last week that helped us today,” said Ali, who added it was why they pressured their opponent with a game plan of “our best way to defend was to attack”.

Despite trailing a goal down in the first half Ali saw an opening and he hit it towards his skipper Dev Dillion who evaded his marker, slammed a shot, the equalizer for both sides to enter the break on a 1-1 draw. Despite a see-saw possession to both sides, neither was able to break the stranglehold until Ali’s second-half penalty corner conversion for the resulting match winner.

Meanwhile, in an earlier final at the same venue Nav Bharat-B collected the Guru Nanak Plate with a 3-0 victory over Khalsa-B and did so without conceded a goal from their preliminary rounds along the way to the final.

In other news related to the one-day tournament, the Sikh Temple, the organisers of the Guru Nanak Cup tournament announced that they are considering next year’s event marking the Golden Anniversary to be an international tournament and will release details as they plan accordingly.