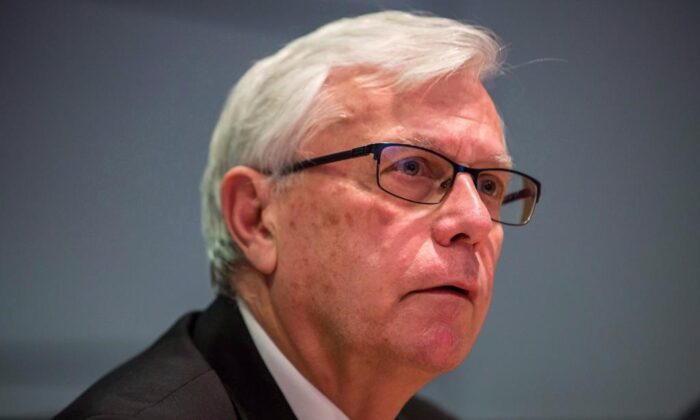 Clerk of the Legislative Assembly Craig James makes a statement to the media in Vancouver, B.C., on Nov. 26, 2018. (The Canadian Press/Ben Nelms)
Canada

No Evidence of Corruption by BC Clerk: Defence

VANCOUVER—A lawyer for British Columbia’s former clerk of the legislative assembly is accusing special prosecutors of trying to “rewrite history,” saying they have failed to meet the high threshold for proving a criminal case against him.

Gavin Cameron began defence arguments today in the trial of Craig James, who has pleaded not guilty to two counts of fraud over $5,000 and one count of breach of trust.

Crown prosecutors have said the case rests on three main areas: James’s claim to a $258,000 retirement allowance; his role in the purchase and storage of a wood splitter and trailer; and his personal expense claims.

However, Cameron argued in B.C. Supreme Court that a guilty verdict could only be supported with proof of corruption and there’s no evidence of that.

He says James was transparent with each of his claims, which were overseen by multiple responsible individuals who raised only “a handful of questions” over half a decade and never lodged a complaint.

Cameron says it was only after then-Speaker Darryl Plecas went on a “crusade” and “threatened” staff that concerns were raised.

Plecas published allegations of misspending at the legislature in a January 2019 report published months after James was placed on administrative leave.

“The Crown’s case is overstated and not responsive to the evidence which was led in the course of its case in this trial,” Cameron says.

“The evidence showed that reasonable and legitimate people acting within reasonable administrative frameworks considered the matters conducted in the open by Mr. James and never once suggested there was fraud or crime.”