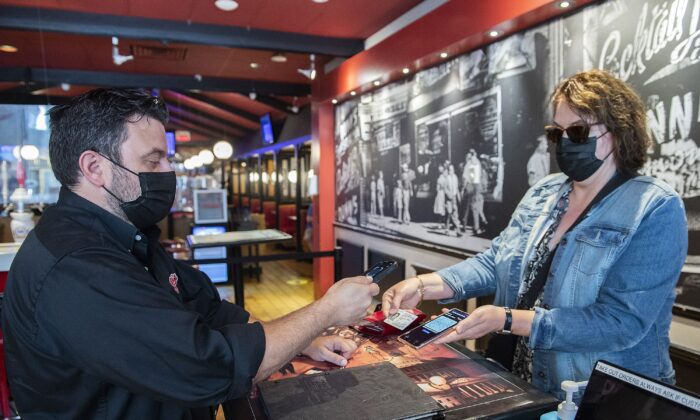 A woman’s COVID-19 QR code is scanned at a restaurant in Montreal on Sept. 1, 2021. (The Canadian Press/Graham Hughes)
Viewpoints

When false philosophies have been cultivated and have attained a wide sphere of dominion in the world of the intellect they are no longer questioned. False superstructures are raised on false foundations, and in the end systems barren of merit parade their grandeur on the stage of the world. — Francis Bacon

There have been two threats to human health in the past 18 months: the immediate biological threat of the SARS-CoV-2 virus, and the political decision to wage asymmetric warfare on it through social restrictions that destroy jobs, contravene human rights, and trash medical ethics.

The political decision to contravene standing law was taken, like every globalist advance, under the auspices of an emergency. Since in war the first casualty is truth, the malign asymmetric effects of these political decisions on public health are getting less publicity than the virus. Yet they are worse, and increasingly so as the war progresses.

Some of the traumas of these political decisions have to be acknowledged. The bitter pill came first. Rather than adopt the sensible, focused protection of the vulnerable elderly proposed by the Great Barrington Declaration, the authorities implemented mass lockdowns and painful restrictions, intensifying the demand for vaccines. The financial consequences of that decision will affect public health for decades.

The decision was sold to the public without debate as a tough but necessary phase that the vaccines would end. There was no indication that the arrival of vaccines would require further “stages,” or an infinite regress of booster shots, or an advancing police state. No one mentioned it would require us to lose individual identity by being indefinitely masked in public or in school, or receive a QR number to identify us—as in prison.

Once the vaccines came, we were assured, things would return to normal.

You might say that vaccine passports offer hopeful signs. I disagree. Vaccine passports, an odious term that normalizes restrictions, are political theatre that suggests that freedom is a gift granted by a benevolent government. Vaxxports are simply a carrot to reward the masses and to give them a scapegoat (the unvaccinated) for the evident failures of vaccines, while distracting them from the fact that the stick of the ongoing political warfare against everyone continues apace.

The vaccines do not stop further waves, and never will. SARS-CoV-2 is endemic.

So apparently is the political war.

As we can already see, public health dictates that everyone must continue to wear masks and practice social distancing and follow mandatory contact tracing protocols. And worse still, rather than admit the failure of the vaccines, because of the sunk costs of both the politicians and the credulous public, people are more willing to do what would have been unconscionable a year ago: dividing their own society, firing employees without cause, and even extending the vaccine mandate to 5-11 year olds who are at no risk, as announced recently by the City of Toronto.

So what is behind the politicians’ continuation of the manifest failures in the fight against COVID?

It is not ignorance. Destroying economic independence, restricting access to medical care, and restricting civil liberties are well known social determinants of poorer health. It is part of the human rights case against dictatorships.

The terrible biological threat posed by COVID may be the excuse, but it lacks any substance. In Canada, life expectancy rose in 2020 and has continued to climb in 2021, and the statistical average age of death from COVID in Canada reflects that it remains a threat to the elderly.

Furthermore, if vaccines spell an intensification of government restrictions, in the form of so-called “vaccine passports” and government-mandated job losses for the non-compliant, mirrored in the corporatist world, then once again, we don’t just face a failure of public health but an atrocity against it. Firing thousands of health-care workers in systems that were said at the outset of the war to be at capacity makes the individual health assaults into a mismanaged social health disaster.

If firing front-line health-care professionals is what it looks like when the government is protecting public health, what does it look like when it is assaulting it?

Scott Masson
Follow
Scott Masson is a public intellectual and an associate professor of English literature. For more information on Masson, visit ScottMasson.ca and YouTube.com/c/DrScottMasson