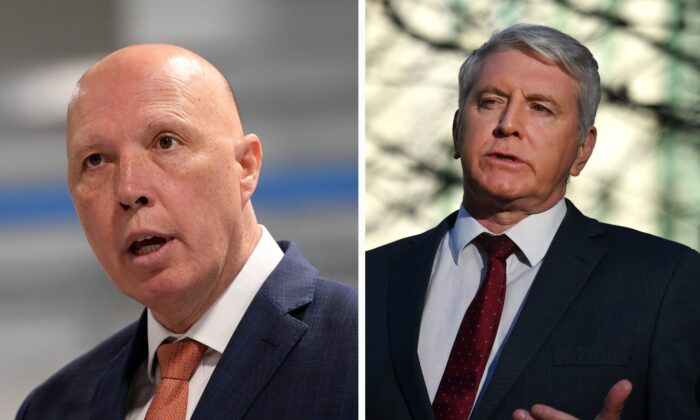 Australian Defence Minister Peter Dutton has stood by his view that Beijing would prefer to see the centre-left Labor opposition win office at the May 21 election.

Dutton, of the governing centre-right Coalition, made the comments during the Defence Debate with shadow defence spokesperson Brendan O’Connor at the National Press Club in Canberra.

“There’s no doubt in my mind that the Chinese Communist Party (CCP) would like to see a change of government at the May 21 election. No question at all,” he told reporters on May 5.

“In relation to the appeasement element, I think that if you look at all of the language of [shadow foreign affairs spokesperson] Penny Wong—Penny Wong believes that she can go to Beijing on a charm offensive and she could change the direction of China under President Xi,” he added. “President Xi, of course, would be laughing under his breath as he was entertaining his dear friend in Beijing.”

Dutton said the CCP would push for a Labor government to stop so-called “acts of aggression” like unwinding the AUKUS agreement with the United States and the United Kingdom in order to “buy time” for its current military build-up.

“China has changed. We know it’s now more assertive, more aggressive, more coercive,” he said. “In fact, Penny Wong, who has just been verballed by Peter [Dutton], made that clear in contributions last year where she outlined the significant shift that’s happened in the region.”

“And as [former head of Australia’s domestic spy agency] Dennis Richardson … probably the most eminent former head of security agencies said … it is not in this country’s interest for a political party to attack the other major political party on the basis of appeasing China—particularly when it’s untrue.”

Dutton later commented that the “hard left” faction within the Labor Party would “break the alliance with the United States tomorrow.”

“You can go through your colleagues one by one to see who would seek to do that,” he said to O’Connor.

Labor’s conflicting position on China internally came to light following the tragic passing of late Labor Senator Kimberley Kitching, where it was revealed she endured internal party pressure for taking a firm stance on the CCP.

Liberal Senator Concetta Fierravanti-Wells made similar claims against her colleagues in late March.

While both major parties have cultivated strong links with Beijing-linked entities over the years, incidents from the Labor Party have been more overt and made headlines.

In late April, it was revealed that current Labor deputy leader, Richard Marles, advocated for Beijing’s increased presence in the Pacific.

In a mini-book published in August, Marles wrote that any action Australia took to deny Beijing access to the Pacific on strategic grounds would be a “historic mistake.”

“Australia has no right to expect a set of exclusive relationships with Pacific nations,” he wrote in “Tides that Bind: Australia in the Pacific.”

Beijing has recently concluded a security deal with the Solomon Islands government that will allow the Chinese regime—with the consent of the Solomons—to dispatch police, troops, weapons, and even naval ships to “protect the safety of Chinese personnel and major projects in the Solomon Islands,” based on leaked pages from the document.

Experts have warned the deal could open the door for the rapid militarisation of the region, and extend the reach of the People’s Liberation Army from the South China Sea to the South Pacific—a strategically critical position just 1,700 kilometres (1,050 miles) from the northern Australian city of Cairns.

The Solomon Islands was the site of extensive fighting during World War II—resulting in over 7,000 casualties to the Allied forces—due to the critical position of the nation and its influence over vital sea lanes.