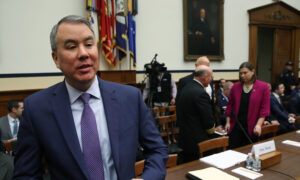 Top Pentagon Official: There Are 'Indications' of 'Iranian Aggression' Against US Forces
0 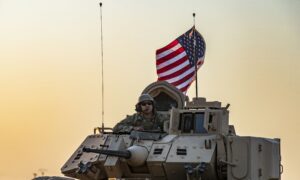 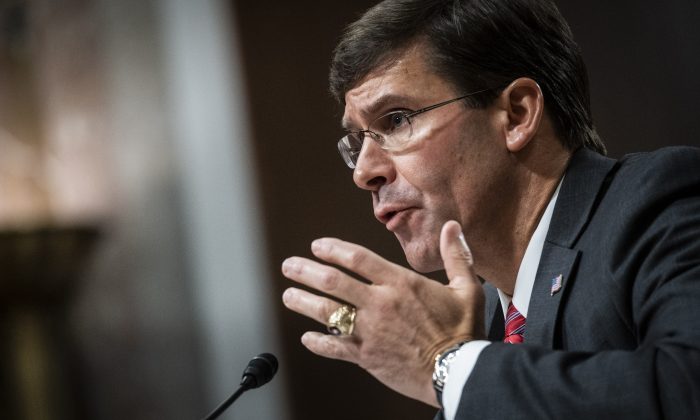 Secretary of Defense Mark Esper, then-nominee, testifies before the Senate Armed Services Committee during his confirmation hearing in Washington in a file photograph. (Pete Marovich/Getty Images)
US News

No Discussion on Sending More Troops to Middle East: Secretary of Defense

“As the Department has stated repeatedly, we were never discussing or considering sending 14,000 additional troops to the Middle East. Reports of this are flat out wrong,” Esper said in a statement on Friday, in an apparent effort to clarify remarks to Congress made by a military official the day prior.

“DOD will always stand ready to respond to future actions by our adversaries if and when they arise, but the Pentagon is not considering sending 14,000 troops to CENTCOM. This report is false.”

The Journal’s report claimed that the United States is considering sending 14,000 more troops to the Middle East. The United States has deployed 14,000 troops there in the last six months.

The report cited anonymous officials and included no identifying information, such as whether they were military officials or what agency they work for.

Department of Defense spokeswoman Alyssa Farah denied the report shortly after it was published on Wednesday, saying, “the reporting is wrong.” She said the United States was not considering deploying 14,000 additional troops.

John Rood, the Pentagon’s No. 3 official, told a congressional committee the next day that the story was “erroneous.”

He said he was not directly contradicting Farah’s statement. He also told Sen. Marsha Blackburn (R-Tenn.) that “we’re concerned” about Iranian aggression and, when pressed about whether the United States is “considering additional troops,” he said “yes.” Esper “has not made a decision,” Rood said.

Sometimes, you gotta be a bit aggressive to get to the bottom of what’s goin’ on. pic.twitter.com/HaAhidU7x9

“Based on what we’re seeing with concerns to the threat picture, it is possible that we would need to adjust our force posture. I think that would be a prudent step, depending on what we observe,” he said.

The Journal story was updated to include Farah’s denial, but not any statements by Rood or Esper.

President Donald Trump reacted to the article Thursday night, writing, “The story today that we are sending 12,000 troops to Saudi Arabia is false or, to put it more accurately, Fake News!”

The story today that we are sending 12,000 troops to Saudi Arabia is false or, to put it more accurately, Fake News!

“Do not believe any article or story you read or see that uses ‘anonymous sources’ having to do with trade or any other subject. Only accept information if it has an actual living name on it. The Fake News Media makes up many “sources say” stories. Do not believe them!” Trump added.

Gordon Lubold, one of the writers, responded to Trump’s first tweet, writing: “@nancyayoussef and I are now in the fake news club. It would have been an honor just to be considered”

And with President Trump’s tweet this hour @nancyayoussef and I are now in the fake news club. It would have been an honor just to be considered

He also responded to Rood’s testimony, writing on Twitter: “The article said only that such a deployment was under consideration, not that it had been decided upon, as Sens. Blackburn and Hawley hammered home…The article also reported that officials are examining a range of options, with 14,000 troops at the higher end.”

Nancy Youssef, the other author on the piece, said, “As always, we stand by our reporting.” She also retweeted a post by an ABC reporter who wrote: “It seems to me that John Rood just acknowledged in a roundabout way to Sen. Blackburn that the Pentagon is considering sending more troops to the Middle East.”

Neither writer has responded to Esper’s statement as of Friday at noon.