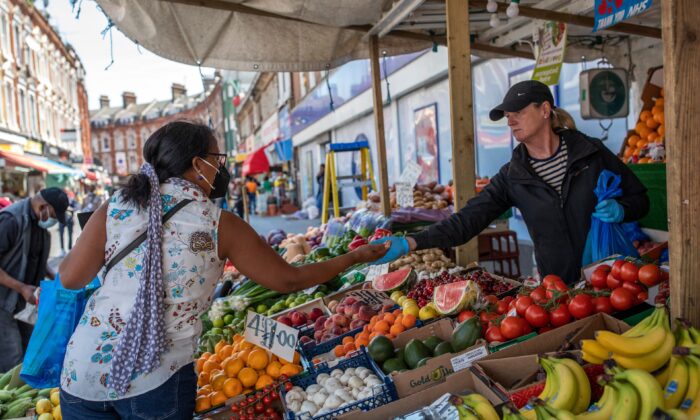 There is no need for consumers to stockpile food in preparation for a possible “no-deal” Brexit on Dec. 31 but supplies of fresh fruits and vegetables will bear the brunt of disruptions it may cause, a British retailer’s group has warned.

“While no amount of preparation by retailers can entirely prevent disruption, there is no need for the public to buy more food than usual, as the main impact will be on imported fresh produce, such as fresh fruits and vegetables, which cannot be stored for long periods by either retailers or consumers,” Helen Dickinson, chief executive of the British Retail Consortium (BRC) said on Sunday.

“Retailers are doing everything they can to prepare for all eventualities on Jan. 1—increasing the stock of tins, toilet rolls, and other longer life products so there will be sufficient supply of essential products,” she said in a statement emailed to The Epoch Times.

The UK officially left the EU in January but trading arrangements such as tariffs and quotas have remained unchanged during the Brexit transition period, which will end on Dec. 31, in just two and a half weeks’ time.

If no trade deal with the EU is reached by then, Britain will default to trading with the 27 EU countries under World Trade Organisation (WTO) rules.

The talks between Britain and the European Union on future trade relations have stalled over two main sticking points—fair competition rules and fishing rights.

British Prime Minister Boris Johnson and European Commission President Ursula von der Leyen agreed on Sunday to “go the extra mile” to try and get a breakthrough during the time that remains. But Johnson insisted that a no-deal Brexit is still the “most likely” result.

Dickinson said that “every passing moment of uncertainty makes it harder for businesses to prepare effectively for Jan. 1.”

“Without a deal, the British public will face over £3 billion (US$4 billion) in food tariffs and retailers would have no choice but to pass on some of these additional costs to their customers who would see higher prices filter though during 2021,” she said.

“Moreover, new checks and red tape that will apply from Jan. 1 will create an additional burden for retailers and their customers.”

She said that the extra costs will exacerbate the hardship many people are already suffering as a result of the COVID-19 pandemic, which was caused by the CCP (Chinese Communist Party) virus.

“With many people’s finances already strained by the economic impact of coronavirus, households can ill-afford a significant rise in food prices. For the sake of customers and businesses around the UK, we need a deal in the next three weeks,” she added.

The sentiment is shared by other business groups. The Confederation of British Industry (CBI) said the government “must move with even more determination to avoid the looming cliff edge of Jan. 1.”

The Society of Motor Manufacturers and Traders Ltd. (SMMT), which represents the auto industry, urged the negotiators to “finish the job” without further delay.

“‘No deal’ would be nothing less than catastrophic for the automotive sector, its workers and their families and represent a stunning failure of statecraft. Quite simply, it has to be ruled out,” said Mike Hawes, chief executive of SMMT.