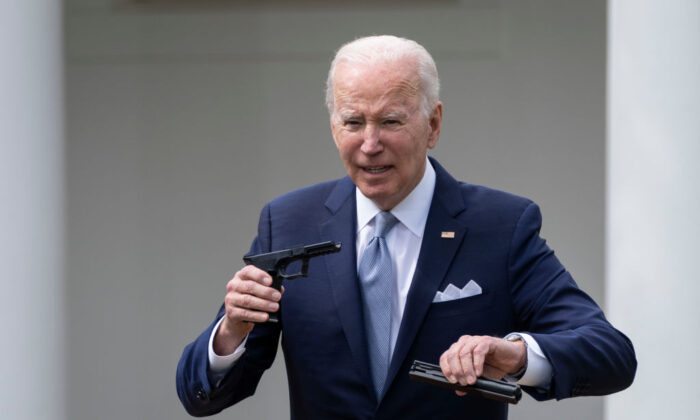 President Joe Biden holds up a so-called ghost gun kit during an event about gun violence in the Rose Garden of the White House on April 11, 2022. (Drew Angerer/Getty Images)
Policies & Impacts

Gun Owners of America, which describes itself as the “no-compromise gun lobby,” is preparing a legal challenge to President Joe Biden’s ghost gun regulation, according to GOA Senior Vice President Erich Pratt.

Pratt says the administration is pejoratively referring to homemade guns as “ghost guns,” and that it’s problematic for Biden alone to cause such a major change in U.S. gun laws.

In an April 11 Rose Garden press conference, during which Biden showed how to put together gun parts, he announced a new rule imposed by the Bureau of Alcohol, Tobacco, Firearms, and Explosives (ATF), which does several things to restrict gun access. It bans the business of manufacturing unserialized “buy-build-shoot” kits that can be purchased without a background check. The kits contain parts that can be assembled into a gun.

These kits will now be considered firearms under the Gun Control Act.

It means commercial manufacturers of such kits must be licensed and include serial numbers on the kit frame or receiver, and commercial sellers of these kits must become federally licensed and run background checks prior to a sale, as they do with commercially made firearms.

“He basically admitted in the Rose Garden that he couldn’t get gun control passed in Congress. He said Congress isn’t passing any gun control restrictions, so ultimately, he’s making an end-around Congress,” Pratt told The Epoch Times. “He just wants to pass gun control, any gun control, but really that’s lawless. It’s the job of Congress, not the president, to make laws.”

The regulation could lead to restrictions on First and Second Amendment rights, Pratt said, but he predicted it wouldn’t have an effect on crime.

“This is going to do nothing to curb crime. It’s a total head fake. The real problem is the left has been throwing criminals back out on the street where they are committing repeat crimes,” he said. “There’s also the registration threat that is a huge problem. We gun owners have always opposed registration because historically, politicians just can’t be trusted with this kind of information.”

“This happened in New York. In the 1960s, they registered long guns and they promised, ‘We’re never going to use the list for confiscation.’ That’s exactly what happened. In 1990, New York used the registration list to seize firearms,” he told The Epoch Times.

“And then I think in 1991, they said, ‘We’re going to do spot checks for compliance.’ What happens with gun registries is well documented in history. And they continually move the pendulum in that direction. They want to keep serializing more guns, more restrictions, now universal background checks is the next step to outlaw all private-transfer sales of firearms, so they have to go through the National Instant Criminal Background Check System.”

“They want to create this Orwellian surveillance state on people, and Gov. Tom Wolf and Josh Shapiro are fully behind that agenda,” Finnell said.

As Pennsylvania attorney general, in 2019, Shapiro tried to implement a similar rule in Pennsylvania. He was sued and it was blocked in court. Now Shapiro, a Democrat, is running for governor.

Wolf has announced plans to implement the same regulations at the state level.

“The numbers don’t lie: ghost guns are being seized and recovered from crime scenes at an alarming rate,” Wolf said in a statement on April 29. “If you want to own a gun, you need to go through checks and balances that are necessary to ensure public safety. Unserialized guns are an untraceable threat to our society, that’s why we’re ready to immediately mirror this new federal regulation at the state level as soon as possible.”

It’s a move that should concern all Americans, Finnell said.

“We’ve had the right to make our own firearms—our own guns—in this country since before the founding of our republic,” Finnell said. “They want to restrict this longstanding right that we’ve had. That’s our issue with it, besides the vastly unconstitutional overreach and lawmaking by executive fiat.”

The Pennsylvania GOA is considering suing the state if Wolf moves forward with his plans.

In a similar case, GOA is currently asking the Supreme Court to consider its lawsuit opposing the banning of bump stocks, an ATF regulation put in place at the urging of President Donald Trump.

“That is so relevant here,” Pratt said. “If we’re able to win that case, it will dramatically restrict the ability of federal agencies to basically ignore Congress and make up their own version of the law that will send people to jail.”

The federal “ghost gun” regulation will take effect 120 days from April 26, the date it was published in the Federal Register.