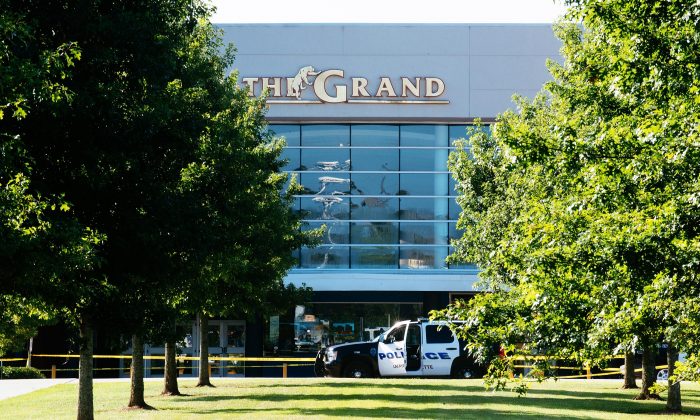 Authorities park at the scene of a Thursday night shooting at The Grand Theatre, in Lafayette, La. on Friday, July 24, 2015. (AP Photo/Denny Culbert)
Crime and Incidents

BATON ROUGE, La.—A journal left behind by the gunman who opened fire in a Louisiana movie theater last summer doesn’t provide a clear motive for the deadly shooting, but the drifter’s own words portray him as a mentally unstable man filled with hatred for his country and for people who didn’t share his views.

John Russell Houser described the U.S. as a “filth farm” filled with “soft targets” in his hand-written, 40-page journal, which police released Wednesday along with nearly 600 pages of investigative reports.

“If you have not stood against filth, you are now a soft target,” the 59-year-old wrote.

An entry on the last page of Houser’s journal noted the start time of the “Trainwreck” screening in The Grand 16 theater auditorium where he killed two people and wounded nine others before he fatally shot himself on the night of July 23.

Houser also railed against women, gays and blacks and wrote about several presidential candidates, including Donald Trump. Elsewhere, he thanked a man accused of killing nine people inside a South Carolina church on June 17 for giving him a “wake up call.” Houser described the shooting suspect, Dylann Roof, as “green but good.”

His journal also contains references to the Islamic State, but he didn’t cite the militant group as inspiration for the shooting.

“I designed a new logo for ISIS and showed it to a friend that agreed it was a ‘big step up,'” he wrote.

Since the night of the shooting, questions have lingered about what drove Houser to open fire and why he picked that theater to do it. The journal and police reports don’t give any easy answers.

But they do reveal more details about a troubled man who may have intended Lafayette to simply be a stopping point. Police believe Houser, who lived in Alabama and Georgia before the shooting, was traveling to Texas when he stopped in Lafayette — a city straddling the interstate that runs the length of Louisiana.

The journal’s contents suggest Houser expected to die and knew others would read the words he left in his room at a Motel 6 in Lafayette. Shortly before the shooting, Houser wrote on the last page that he was leaving the journal “in hopes of truth, my death all but assured.”

Investigators described the shooting in gruesome detail in reports that totaled 589 pages. They determined that Houser entered the theater with a handgun hidden in his pants, and waited several minutes before pulling it out and opening fire.

One witness described seeing Houser walking down the steps, firing rounds at victims before shooting himself in the head. Another said she heard someone scream “He’s reloading!” before she ran out.

Authorities also shared findings of their investigation into Houser’s troubled past. In social media posts, Houser expressed his political beliefs and “anti-government tendencies,” they noted.

Edwards to Be Sworn in Monday as Louisiana’s 56Th Governor

“Comments posted in his own writing revealed his ideals and that he had battled his local government and had a hatred for the United States Government. Houser’s interests also included ‘Golden Dawn’ which is a Greek organization with neo-Nazi beliefs,'” one report stated.

Houser had a long history of erratic behavior in the Georgia and Alabama communities where he lived before drifting to Lafayette, where an uncle had once lived decades ago.

In 2008, a Georgia judge ordered Houser detained for a mental evaluation after relatives claimed he was a danger to himself and others. But that judge did not have him involuntarily committed, which could explain how he passed a federal background check in 2014. He legally bought the .40-caliber handgun he used in the shooting from a pawn shop in Phenix City, Alabama, where he became estranged from his family, lost his businesses and faced eviction from his home.

Before he was finally forced out, he ruined the property, pouring concrete into the plumbing and glue into the fixtures, police said. His estranged wife, Kellie Houser, filed for divorce in March 2015, saying he had repeatedly threatened her.

Lafayette Police Chief Jim Craft has said Houser visited the theater more than once, perhaps to determine “whether there was anything that could be a soft target for him.”

Investigators found wigs and disguises in his motel room, raising the possibility that he had considered making an escape after the shooting. Police said he did try to blend in with the fleeing crowd, but turned back and killed himself as police approached.

In August, “Trainwreck” star Amy Schumer spoke tearfully of the two women killed in the shooting as she urged lawmakers to support a gun control bill sponsored by her second cousin, U.S. Sen. Charles Schumer.