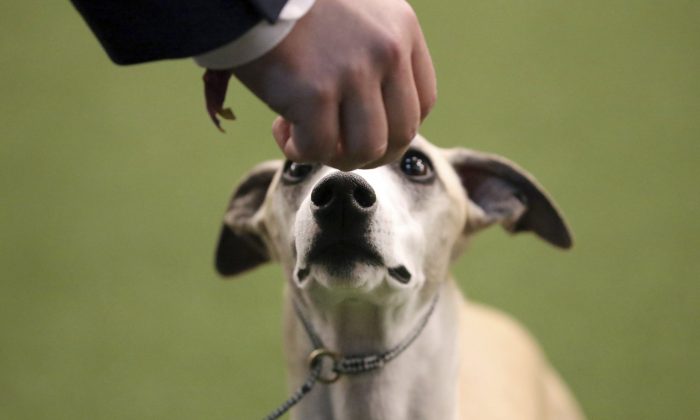 Whiskey the Whippet listens to commands from his handler Justin Smithey during the Best of Breed event at the Westminster Kennel Club dog show in New York, on Feb. 11, 2019. (AP Photo/Wong Maye-E)
US News

NEW YORK—Straight up, this was a Westminster Kennel Club surprise: Bourbon over Whiskey.

A big-winning whippet was bounced from America’s top pooch pageant Monday — knocked off, in fact, by his own sister.

Whiskey had won the prized National Dog Show televised on Thanksgiving Day and the prominent AKC event shown on New Year’s Day. But his bid for a Triple Crown of dogdom ended when he was topped by littermate Bourbon in the breed judging.

Bourbon advanced to the hound group competition at Madison Square Garden on Monday night. The toy, herding and nonsporting champ also will compete — Biggie the pug, who had fans chanting his name at the Garden last year, advanced to the evening session.

More than 2,800 dogs in 203 breeds and varieties were entered. The best in show will be picked Tuesday.

For Pickett Smithey, the win was a bit bittersweet. She teared up talking about the result because she and her husband, Justin Smithey of Sugar Valley, Georgia, co-own both dogs. He guided Whiskey in the ring.

Last year, Whiskey won the breed at Westminster, and Bourbon was awarded best of opposite sex. This time, the 3-year-olds switched places.

Whiskey wasn’t sour after the upset. The littermates are “best buds,” Cheslie said, and nuzzled outside the ring when it was over.

Whippets are similar to greyhounds, only smaller. They’re known for their tremendous running speed, but Bourbon was completely under control. She was more mesmerized by the meat treats Cheslie fastened to her arm with a rubberband.

At one point, she sensed Bourbon needed a little extra.

“Go get me the fish,” she told an assistant from inside the ring.

There were 57 golden retrievers entered, but just one sloughi — who was a no-show.

We have an upset in the whippet category at Westminster. I would have used the headline WHIPPET GOOD, but that’s me. https://t.co/nmtssunQkR