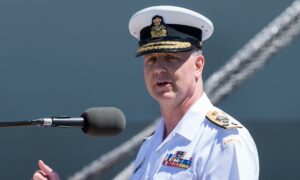 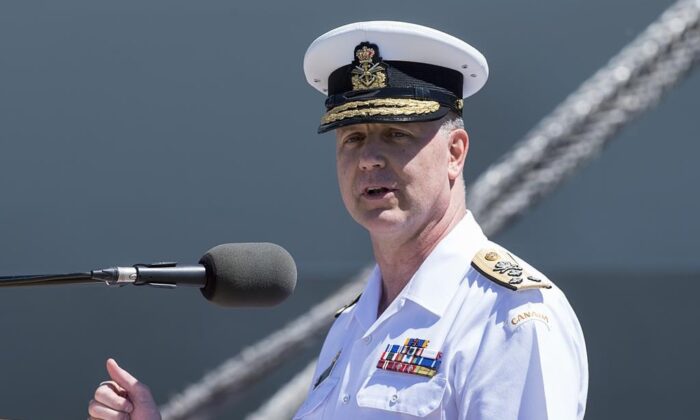 Vice-Admiral Art McDonald, the new head of the Navy, addresses the audience at the Royal Canadian Navy Change of Command ceremony in Halifax, on June 12, 2019. (The Canadian Press/Andrew Vaughan)
Canada

No Charges Against Top Military Officer McDonald After Misconduct Investigation

OTTAWA—An investigation into the conduct of Canada’s top military officer Admiral Art McDonald has ended with police saying there is not enough evidence to lay charges.

Provost Marshal Brig.-Gen. Simon Trudeau announced the end of the investigation on Friday evening, nearly six months after the Canadian Forces National Investigation first revealed that it was investigating the chief of defence staff.

“The CFNIS was able to both identify and interview a large number of potential witnesses,” Trudeau said. “The evidence gathered from these witnesses was considered in the ultimate determination that the evidence did not support the laying of any charges.”

The decision paves the way for McDonald to return to his position as commander of the Canadian Armed Forces after he voluntarily stepped down in February due to revelations about the military police investigation.

But it is also likely to spark fresh questions about the military’s ability to properly address allegations of misconduct involving top officers.

The nature of the allegation against McDonald has not been publicly confirmed, but CBC reported in February that it related to an allegation of sexual misconduct dating back to his time commanding a Canadian warship in 2010.

Global News has reported that navy Lt. Heather Macdonald, a navy combat systems engineer, came forward with the allegation against McDonald. Macdonald was quoted by Global on Friday as saying she was upset by the military police decision.

“I am not surprised as this was exactly why I was reluctant to come forward and why most survivors don’t come forward. It’s not worth it. I feel a little like I’ve gone through hell for nothing,” Macdonald was quoted as saying.

“Feel a bit like I’ve been punched in the stomach.”

Trudeau in his statement emphasized the independence of his military police investigators, saying: “The CFNIS conducts its investigations in a thorough and professional manner independent of the chain of command.”

He added that no further information would be provided.

Defence Minister Harjit Sajjan’s spokesman Todd Lane refused to comment on Friday, including on whether McDonald would be reinstated as chief of the defence staff.

McDonald did not immediately respond to requests for comment.

McDonald temporarily stepped down from his position on Feb. 24 because of the investigation, only five weeks after taking over as Canada’s top military commander from Jonathan Vance, who was accused of sexual misconduct.

Vance, who has denied any wrongdoing, was charged last month with one count of obstruction of justice following a separate military police investigation. His case has been referred to the civilian justice system.

The allegations against Vance, McDonald and other senior officers prompted the Canadian Armed Forces’ latest reckoning with sexual misconduct, which included months of parliamentary hearings and promises of action from the government and military.

Underlying much of the crisis were questions of fairness and accountability in how the military handles such allegations, with concerns that those higher up in the ranks are treated less severely than those near the bottom.

Those concerns coincided with a report from retired Supreme Court justice Morris Fish in June that noted that it is legally impossible to court martial Canada’s top military commander, though criminal cases can be handled by the civilian system.

The government has also tapped retired Supreme Court justice Louise Arbour to review and come up with specific recommendations on how to better handle sexual assault, harassment and other misconduct in the ranks.