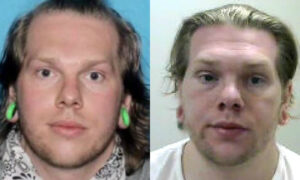 Police tape in a stock photo. (Carl Ballou/Shutterstock)
US

No Charges Against Indianapolis Officer in Fatal Shooting: Grand Jury

A grand jury has decided not to indict an Indianapolis police officer over the death of 21-year-old Dreasjon Reed who was fatally shot during a foot chase that followed a vehicle pursuit with police on May 6.

The grand jury’s decision not to indict Dejoure Mercer, the Black officer who exchanged gunfire with Reed, was announced Tuesday by special prosecutor Rosemary Khoury. Reed also was Black.

Reed’s shooting was not recorded by any police camera because the department only began implementing a body camera program in August. But Reed livestreamed an earlier car chase and part of the foot chase on Facebook.

Khoury, who was appointed to oversee the investigation into Reed’s fatal shooting, had announced on Aug. 21 that she had requested that a grand jury be impaneled to handle the final stage of that investigation and consider whether an indictment should be brought against Mercer.

The jury determined that there wasn’t enough probable cause to charge Mercer.

“This has not been an easy task and it’s been a very heavy burden,” Khoury told reporters Tuesday.

“I don’t know how Mr. Reed’s mother feels, but I’m a mother of two Black boys … I am also very empathetic toward Officer Mercer. I know that had to be a difficult position to be in,” she said, holding back tears. “No one wins.”

“I hope that anyone who was a part of this entire process can look at this and feel comfortable that the investigation was done in an impartial manner. That’s exactly what my team and I did over the past five months.”

“Fairness. From day one that’s been my goal,” she also said.

Before the fatal shooting, the Indianapolis Metropolitan Police Department said officers began pursuing Reed after they saw him driving recklessly on Interstate 65. Supervisors ordered an end to that pursuit because the vehicle was going nearly 90 mph (145 kph), police said. An officer, Mercer, later spotted the parked car on a city street and pursued Reed on foot.

According to a police investigation in the wake of the shooting, Mercer first attempted to apprehend Reed using a stun gun. Pixilated surveillance video from exterior cameras of a nearby lock and key business captured Reed falling face-first to the ground but he was not incapacitated.

Police say they believe that Reed then rolled over onto his buttocks while drawing a gun he had on his person. As to who fired the opening shot, no conclusion could be made from the video footage. State police Detective David Herron said, “I don’t think we can definitively (say) … We can say Mr. Reed fired two shots.”

Reed’s family insist that the 21-year-old didn’t shoot Mercer first, according to their attorney.

Forensics found two casings fired from Reed’s gun and another 13 from Mercer. Herron said that the bullets hit Reed in his left arm and left shoulder area, a leg, his head, and the back of his neck.

The investigation also found that Reed had stolen the gun from a pawn shop in Texas and had used it in two previous drive-by shootings at officers in Indiana, Herron said, citing video evidence from Reed’s phone and a match between the cartridges collected at shooting scene with the gun in Reed’s possession when he was shot.

The family and their attorneys have said that they don’t trust the police department and believe it is trying to conceal information. Indiana law prohibits the disclosure of evidence presented to the grand jury.

“The things that you may have heard in the news coming from anyone, just know the fabrication is real. Everything that someone has told you … is a complete lie,” Wynn said on Aug. 5 after the Marion County coroner’s officer released Reed’s autopsy report to his family.

Her complaint also names Steven Scott, another Black officer, who was disciplined after he was captured on video after Reed’s shooting saying: “I think it’s going to be a closed casket, homie,” an apparent reference to a closed-casket funeral.

Following the decision, the police department said in a statement: “We understand that this result may be frustrating for some of our residents, but it is our hope that the full transparency offered by Prosecutor Khoury and Superintendent Carter will help to move our city forward, improve the relationship between our officers and neighborhoods, and bring us closer to healing the division in our community.

“We look forward to continuing a productive dialogue with our residents and building the types of partnerships with our neighborhoods that prevent violence.”

The department also thanked citizens on the grand jury for ensuring “a fair and just investigative process and a transparent outcome.”