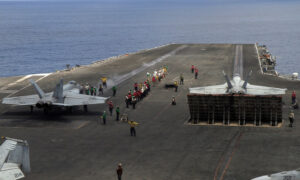 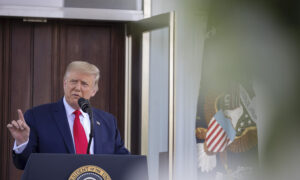 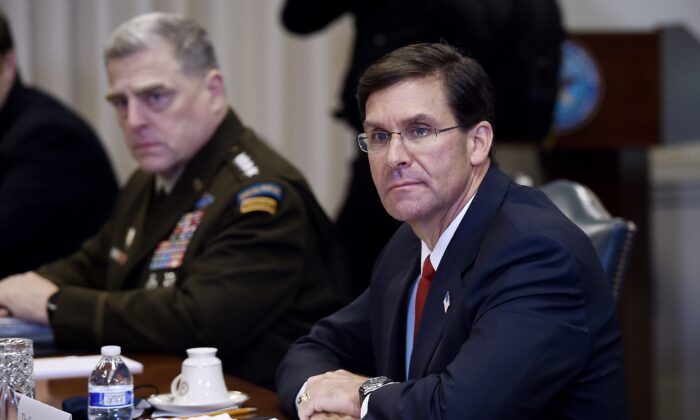 “There’s been no change to DoD alert levels. The U.S. military stands ready to defend our country and interests. There’s no change to the readiness or capability of our armed forces. Our national command and control structure is in no way affected by this announcement,” said Jonathan Hoffman, assistant to Secretary of Defense Mark Esper.

A slew of social media users, including an NBC reporter, suggested that E-6B aircraft were placed on alert because of Trump’s diagnosis.

“With regard to reports about E-6B aircraft on alert status, U.S. STRATCOM has confirmed these E-6B aircraft were part of pre-planned missions. Any timing to the president’s announcement was purely coincidental,” Hoffman said.

Esper and Joint Chiefs of Staff Chairman Gen. Mark Milley met with Trump on Sept. 27, when the president held an event with relatives of military members who lost their lives in service.

Esper tested negative for COVID-19 on Monday and Wednesday, and was being tested again on Friday. He is currently overseas and will not be returning early, according to the Pentagon.

Numerous others who came into contact with the president, including Vice President Mike Pence, Democratic presidential nominee Joe Biden, and Secretary of State Mike Pompeo, tested negative on Friday.

Hoffman said Esper is confident the Trumps “will continue to receive the best medical care in the world.”

The Trumps are isolating themselves at the White House, per quarantine protocol. They’re showing mild symptoms, according to chief of staff Mark Meadows.

Symptoms of COVID-19 include fever, aches, and loss of taste or smell. COVID-19 is a disease caused by the CCP (Chinese Communist Party) virus.

Most COVID-19 patients recover. The disease primarily affects the elderly and those with underlying health conditions such as kidney disease and hypertension. It kills a small percentage of infected.

Sean Conley, the president’s current doctor, said in a memorandum that both the president and first lady were doing well on Thursday evening.

Conley said he and the White House medical team would “maintain a vigilant watch,” adding, “Rest assured I expect the President to continue carrying out his duties without disruption while recovering.”

“The President was in good spirits. The first thing he asked me is how’s the hearings going?” Graham said, referring to the effort to confirm Trump’s Supreme Court nominee, Amy Coney Barrett, who tested negative for COVID-19 on Friday.