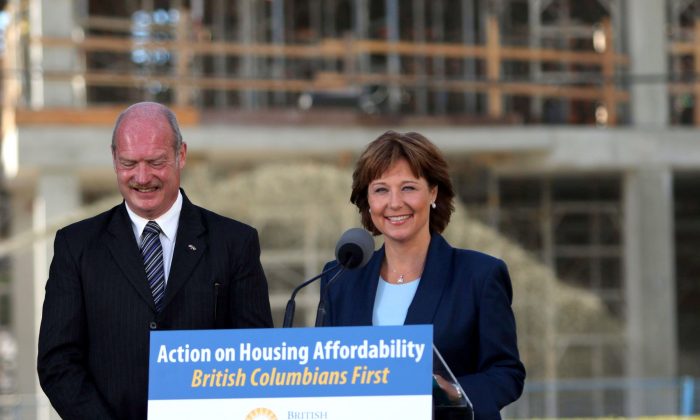 VICTORIA—There will be no reprieve from a new tax on foreign buyers who have signed contracts to purchase homes in Metro Vancouver, B.C. Finance Minister Mike de Jong says.

The tax takes effect on Aug. 2, and long-term contracts, such as pre-sale agreements for condos under construction and pending property purchases involving foreign buyers, will pay the new 15 percent tax.

“If the transaction is registered Aug. 2 or afterwards, the tax applies,” de Jong said Tuesday, July 26.

Dan Morrison, president of the Greater Vancouver Real Estate Board, had called on the government to exempt real estate deals that are in the process of closing to minimize short-term volatility in the market.

On Tuesday, the province also released updated figures from a snapshot of five weeks between June 10 and July 14 indicating that 935 of the 9,636 homes sold in Metro Vancouver went to foreign nationals.

The new tax means a foreign buyer would pay an additional $300,000 in tax on a $2-million purchase.

Foreigners also paid more on average for homes, spending $946,945 compared with an average purchase price by Canadian citizens or permanent residents of $911,425, the figures show.

Last month, the real estate board said its benchmark price for detached properties in Vancouver had risen above $1.5 million.

The tax is only for foreign buyers who purchase in Metro Vancouver. De Jong said the government will track real estate purchases after the tax comes into effect to determine if foreign buyers have taken their business to southern Vancouver Island and the Okanagan.

The legislation includes provisions to expand the property transfer tax beyond the Vancouver area if necessary, he said.

“One of the things we are going to be watching post Aug. 2 is the degree to which a significant shift in taxation policy, which just applies to Metro Vancouver, alters behaviour of the market and begins to shift activity outside of Metro Vancouver,” said de Jong.

The new tax means a foreign buyer would pay an additional $300,000 in tax on a $2-million purchase. All purchasers already have to pay a one percent tax on the first $200,000 of their purchase, two percent on the remaining value up to $2 million, and three percent on the portion above that.

“I welcome what [de Jong] is putting forward, and we’re certainly looking at whatever options can be made available,” he said during a news conference Tuesday.

“The Ontario government should take a long look at a similar move,” Porter said in a note to clients. “Any additional revenue would be a bonus for the debt-heavy province. Even a cautious estimate would peg potential revenues from such a tax well into the hundreds of millions for B.C.”

However, Toronto-based realtor Cailey Heaps Estrin of Royal LePage said she didn’t want to see Ontario take a page out of B.C.’s book.

“I recognize that we as a country are politically and financially stable and attractive to foreign buyers, both investors and people who will eventually reside here,” Heaps Estrin said.

“I think that historically we’ve had a very favourable relationship with other countries because of our policies that welcome new Canadians and people from other countries, and to tax them feels unfair to me.”

She added that while the idea seems attractive in the current market environment, during slower periods it could become a disadvantage.

“Once the hot markets slow down I think these taxes will hurt the cities that are most affected by them,” Heaps Estrin said.

An April report from Canada Mortgage and Housing Corporation pegged the rate of foreign ownership in Toronto’s condo market at 3.3 percent.

On Wednesday, Canada’s national housing agency rang more alarm bells about Vancouver’s real estate sector after it released a report saying there is now strong evidence of problematic conditions in the city.

“Right now we’re seeing moderate evidence of overheating and price acceleration in Vancouver because supply is not keeping pace with demand,” Robyn Adamache, a principal market analyst for Canada Mortgage and Housing Corp., said in a statement.

“We’re also continuing to see strong evidence of overvaluation mainly because single detached home prices are higher than those supported by economic fundamentals.”

The report also said that evidence of problematic conditions in Canada’s housing market as a whole has risen from weak to moderate, adding that there was strong evidence of such conditions in Toronto, Calgary, Saskatoon, and Regina.