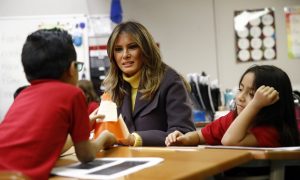 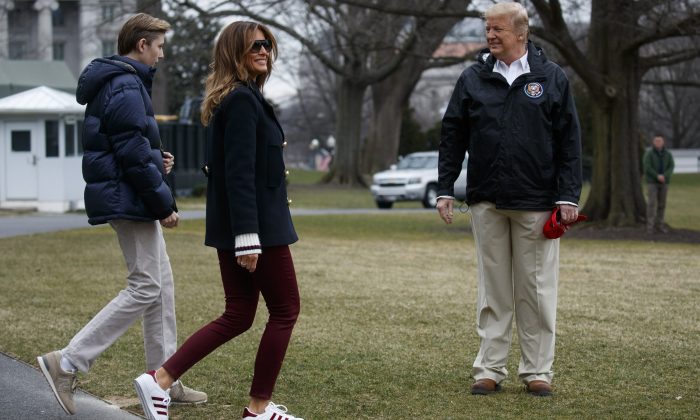 President Donald Trump waits for his son Barron Trump, and first lady Melania Trump after speaking with reporters outside the White House in Washington before traveling to Alabama to visit areas affected by the deadly tornadoes on March 8, 2019. (Evan Vucci/AP Photo)
Politics

WASHINGTON—President Donald Trump is not amused by the #FakeMelania conspiracy theories circulating on social media.

He said on March 13 that if there was a body double of his wife who stepped in to fill her shoes, then it would be the “fake news” that organized it.

Trump alleged on Wednesday in a tweet that photos of his wife had been altered to make them appear as though a look-alike accompanied him to Alabama last week to survey tornado damage.

“Fox & Friends” reported on the body-double theory Wednesday as the show’s hosts weighed in on a discussion that aired Monday on ABC’s “The View.” Hosts of the ABC program debated whether an impostor had traveled with Trump.

“The Fake News photoshopped pictures of Melania, then propelled conspiracy theories that it’s actually not her by my side in Alabama and other places,” the president tweeted. “They are only getting more deranged with time!”

The Fake News photoshopped pictures of Melania, then propelled conspiracy theories that it’s actually not her by my side in Alabama and other places. They are only getting more deranged with time!

Hosts of “The View” had commented on how the woman at Trump’s side in photos of the trip appeared shorter than usual and had a different facial structure than the first lady’s. One host allowed that the first lady might have been wearing flat shoes.

FAKE MELANIA CONSPIRACIES RETURN: The internet is buzzing again with theories that first lady Melania Trump is using an imposter to stand in for her — the co-hosts investigate. https://t.co/f8u2wc159S pic.twitter.com/XNYBT9U6S8

In fact, the 5-foot-11 first lady had ditched her customary stilettos for sneakers to walk around the rough terrain with the 6-foot-3 Trump.

A conservative online news organization reported the president’s frustration with press coverage of his wife after an interview on Monday.

“If I were a Democrat instead of a Republican, she’d be Jackie O times twenty. Instead, they go after her,” Trump told Breitbart News. Trump was referring to President John F. Kennedy’s wife, Jacqueline Kennedy Onassis, who often was referred to as “Jackie O” after she remarried following Kennedy’s assassination.

Several factors can influence the way people appear in photos, including the angle at which the photos are taken, the type of camera lens that is used and the positioning of the photographer, said Akili Ramsess, executive director of the National Press Photographers Association.

News images are not to be altered beyond basic toning and cropping, she said.

“Manipulation is against photojournalism ethics,” Ramsess said, adding that most newsrooms follow the ethics guidelines on the association’s website. “Photographers or editors can be fired over such manipulation.”

The “FakeMelania” hashtag has been around since at least 2017, Trump’s first year in office, with Twitter searches producing numerous photos of the first lady and unfounded commentary that the woman in the images is not Melania Trump.

Toward the end of the debate on “The View,” contributor Ana Navarro-Cardenas, who opposes Trump, said: “Let’s have fun with Melania. She’s beautiful, and we’re doing this in jest.” Abby Huntsman, a Republican on the panel, followed up by asking, “Does that make it better?” That prompted co-host Joy Behar, who also disapproves of Trump, to say: “We’re not here to be better people. We’re here to have a good laugh.”

Stephanie Grisham, the first lady’s spokeswoman, said the episode “went beyond the petty mean-girl spirit that we’ve grown accustomed to.”

“People died, people lost family, people are hurting in Alabama,” Grisham said Wednesday in an email. “I personally watched the president and first lady hug, listen to, and comfort people who had lost everything—and the ‘ladies’ of The View instead chose to laugh and joke about a body-double conspiracy.”

.@flotus & @potus traveled to Alabama to pay their respects & comfort victims of the tornado devastation. In typical fashion, @theview chooses to laugh in the face of tragedy. Shameful. https://t.co/KzG2c4Th4a

The White House has not responded to requests from the media for comment. The questions from the media have implied that Trump should know who is responsible for doctoring the photos and should be able to name them.