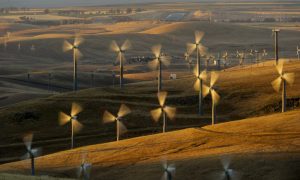 Bladeless Turbines Could Revolutionize the Way Wind Energy Is Produced

In the new millennium, wind turbines are a fixture of the countryside, dotting the green hills that flank the roads and highways. These latter-day obelisks are heralded as a symbol of environmental values, but they have their drawbacks, disrupting nature in their own ways.

Not only are turbines a major source of noise pollution, they inadvertently kill eagles and other flying animals, with casualties mounting in the tens if not hundreds of thousands each year in the United States alone, according to some estimates.

But these blemishes of wind energy don’t appear intractable, with solutions already in sight. Spanish inventors have developed prototypes for a bladeless wind turbine that harnesses wind vortexes to generate energy by shaking back and forth.

Inspired by the vortex winds that ripped apart the Tacoma Narrows Bridge in 1940, the inventors set themselves to harnessing the same forces for renewable energy, founding the company Vortex Bladeless to make it available to the world.

Vortex Bladeless is still in the process of making its first commercial turbines, which are due for markets in the middle of 2017 at the earliest. The company boasts that the 4 kWha, 41-feet Vortex Mini can capture 40 percent of the wind’s power under ideal conditions, 30 percent less than conventional turbines, according to Wired.

Still, if the company can deliver on the advertised pricing—that windless turbines cost 53 percent less to make and 51 percent less to operate than conventional ones—owners should easily prefer the bladeless model, more of which can fit in a given area, and are suitable for more terrains because they make less noise.

Wind energy is a small but sizable sector in the energy market, having generated $12 billion in private investment in 2014 in the United States, and employs more than 20,000 workers.