No Bernie, the Police and Fire Departments Are Not Socialism 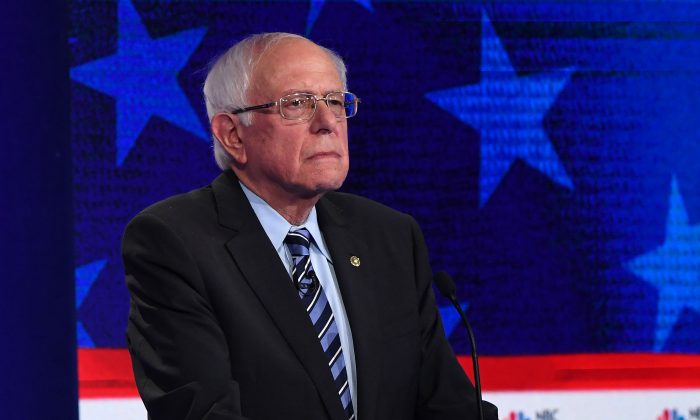 In their incessant propaganda war to move the United States leftwards, leftists often claim that this country already is partly socialist. And they are partially correct. But in their urgency to fool us all, they often stretch their argument to include many institutions that are decidedly not socialist.

In the war of ideas, it’s important that those of us who love liberty and oppose socialism actually understand the difference.

Sen. Bernie Sanders (I-Vt.), who knows socialism better than anyone, often plays this deceptive game. As he recently said: “When you go to your public library, when you call your fire department or the police department, what do you think you’re calling? These are socialist institutions.”

Yes, no, no, Bernie. I’ll concede your point about public libraries, but the police and fire departments are most definitely not socialist institutions.

Why is a public library socialist, but police and fire departments aren’t?

Socialism is about redistribution of wealth. People pay taxes and the government then gives it to others, whether they have contributed toward the cost of the service or not. That’s a library, a public school, food stamps, or any form of “universal basic income.” These are often termed “transfer payments.” The government takes money from individuals and corporations and gives it those it wants to support—or get votes from. This is, of course, completely immoral and antithetical to the principles of a free and just society.

In a free society, citizens recognize that certain threats cannot be dealt with by individuals alone. The government’s first and only legitimate role is to safeguard the lives, rights, and property of its citizens. Citizens pay a little bit of tax—which should never be more than 10 percent of income—to fund a military to protect against invaders; police and prisons to capture and incarcerate criminals; and certain emergency services to protect against fire, floods, pandemics, or meteorite strikes. I will concede, though, that often even some of the emergency services could be better handled by private institutions.

The military, police, and justice systems should be completely public institutions. Why? Because fighting invaders or a necessary foreign war requires a national public effort. Only a united public effort can adequately defend a whole nation or territory from invasion or defeat a dangerous enemy abroad. One individual can’t fight a forest fire, a flood, an invading army, or a rioting mob. That requires a community effort. Free peoples have understood that concept since the beginning of time. It isn’t socialism. It’s a price free people willingly pay to stay free.

The police and justice systems are essentially organized force. They must be completely neutral and follow the laws set down by the people’s representatives. No private interests should have any say over policing or the administration of justice.

So that’s one more point I’ll concede to socialists. Private prisons are wrong. Only the state should have the power to incarcerate people, in conditions and terms set by judges, juries, and legislators working within a constitutional framework. No private institution should make money off jailing people, aside from those providing goods and services, such as food, clothing, and utilities, to public penal institutions. Private institutions running jails have every incentive to lobby legislators for longer prison terms, for instance. Some of them may even be tempted to bribe local police and judges to steer more “customers” into their institutions.

Roads and bridges is a tricky one. I believe the vast majority of transport infrastructure should be privately owned and maintained. Use a private highway and you pay a small electronically collected fee, just as most public tolls are collected now. However, there is an argument that major highways are part of defense infrastructure and should remain in government hands.

President Dwight Eisenhower built the U.S. superhighway system in the 1950s and the government seized lots of private land to do it. The president argued that these highways were needed for military purposes. They were essential to enable the rapid movement of troops, supplies, and weaponry in the event of a major war. He was correct. The fact that this infrastructure helped the U.S. economy tremendously was a bonus.

Why do we need public libraries? If every public library closed tomorrow, wouldn’t thousands of cheaper and better private-run or charitably run institutions spring up to replace them?

Benjamin Franklin pioneered public libraries, and Thomas Jefferson built public schools to educate a new frontier society. Admirable goals at the time, but both could be better handled by the private sector today.

Education can be delivered in four basic ways.

The next best option is a mix of public and private education, but completely free from centralized government control. No centralized Department of Education. All public education controlled at the county and state levels. No taxpayer-funded “charter schools.” Mixing the profit motive of the private sector with the low accountability levels of the public sector is a recipe for corruption and co-option by radicals.

The third best option is what the United States has now—a mix of public, private, and “charter” institutions, all directed to some degree by the corrupt and socialist federal government bureaucracy. This is an indoctrination factory and a recipe for disaster. We will lose our kids and the future of this country if we allow this corrupt mess to continue.

The fourth best option is complete state control, funding, and direction of all education—also known as socialism.

The socialists are right. U.S. education is already heavily socialist. That shouldn’t be an excuse for more socialism. It should be an urgent wakeup call to abolish the Department of Education, return education to local control, and move toward a completely private system. If we care about our children, this is the direction we must go.

In today’s United States, there are a plethora of government agencies handing out all sorts of benefits to almost anyone who asks. Some of them sadly have widespread public support, even among many self-proclaimed “conservatives.”

Social Security and Medicare are two examples. Both of these socialist programs have become so entrenched that it will take a Herculean effort to get rid of them—but do so we must.

This isn’t because I want to see the elderly and ill starving and dying in the streets. It’s because these bureaucracies provide terrible service and concentrate huge amounts of money in governmental hands. The temptation to loot that pot of gold is overwhelming. If a private fund manager steals his clients’ pension contributions, he goes to jail. If a politician does it, he gets reelected. Virtually all public pension and health schemes get repeatedly looted—to the detriment of those who rely on them most.

To avoid national bankruptcy and the mass destitution of the elderly and middle classes that will inevitably follow, these corrupt schemes must be phased out, beginning as soon as possible. If we start now, there will be minimal pain as we will see a rebirth of the efficient and personal “friendly societies” and private insurance and savings schemes that used to fulfill these roles. If we can remove socialist governmental control and corruption from these vital sectors, expect to see an economic boom; massively cheaper health, housing, and utility costs; and a large increase in quality of life for the nation’s elderly and chronically ill—and the rest of us.

The socialists are partially right. Much of the United States is already socialist—almost all of the bad parts, for example. The answer is to roll back that socialism, not expand it.

Some of the institutions socialists claim as examples of socialism are anything but. They are simply the collective defense mechanisms that any free society needs to protect its citizens’ rights and property.

Don’t be fooled by the propaganda. If the government takes large chunks of your wealth to fund whomever it wants to please, that’s socialism. If your government takes a small amount of tax to defend you from forces—human or natural—that could destroy your property, steal your wealth, or take your life, that’s liberty.