‘No Benghazis on His Watch’: Graham Praises Trump Response to Embassy Protests in Baghdad 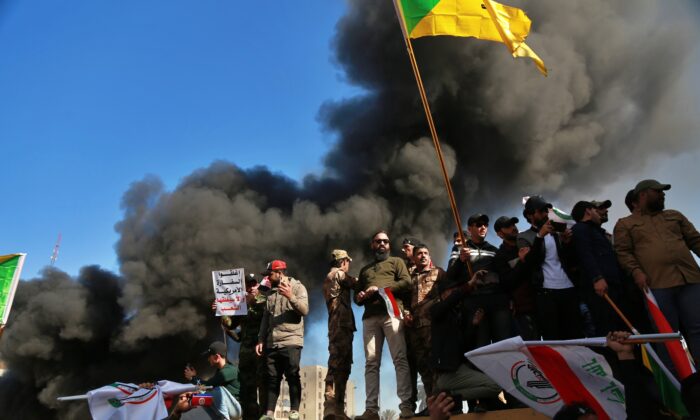 Senate Judiciary Chairman Lindsey Graham (R-S.C.) praised President Donald Trump for his response to an attack on Tuesday at the American embassy in Baghdad, Iraq, while Trump’s former adviser, John Bolton, criticized Iran for its role in the incident.

“Very proud of [Trump] acting decisively in the face of threats to our embassy in Baghdad,” Graham wrote on Twitter as the news unfolded. “He has put the world on notice—there will be no Benghazis on his watch.”

The longtime senator then issued warnings to both the Iranian regime and U.S. allies in Iraq, telling Tehran to “choose your battles wisely” while asking Iraq to “protect our American personnel.”

On Tuesday, protesters attacked the embassy in Baghdad, scaled the walls, and forced open the gates of the compound. Hundreds demonstrated against U.S. airstrikes on an Iran-backed terrorist group in Iraq.

Two sources at the protest witnessed the attempt to break into the compound, CNN reported. Security personnel fired tear gas to push the protesters back. As a result, demonstrators burned items and threw rocks.

The embassy was placed under lockdown. Protesters breached the first layer of security at the compound and damaged a reception area before being pushed back by Iraqi security forces, reported the Washington Post.

According to Bolton, the incident harked back to the 1979 Iranian revolution that installed the current regime.

“The attack on the U.S. embassy in Baghdad is straight from Iran’s playbook in 1979. It’s a sign of Iranian control over Shia militia groups, not a sign of Iraqi anti-Americanism. We must protect our citizens from Iranian belligerence,” Bolton wrote on Twitter.

Four decades ago, Iranian students took over the American embassy in Iran and held around 50 Americans hostage for more than a year following the Islamic revolution.

Tuesday’s protests were in response to five U.S. airstrikes in Syria and Iraq over the weekend on facilities controlled by the Kataib Hezbollah terrorist group, which is backed by Tehran.

Trump said the strikes were in retaliation to recent attacks that left an American citizen dead.

“Iran killed an American contractor, wounding many. We strongly responded, and always will. Now Iran is orchestrating an attack on the U.S. Embassy in Iraq. They will be held fully responsible. In addition, we expect Iraq to use its forces to protect the Embassy, and so notified,” he wrote.

An Iranian official on Monday threatened Washington with “consequences” following the strikes.

The United States “has demonstrated its decisive support for terrorism and disregard for the independence and sovereignty of nations by launching these attacks, and it must accept the responsibility for the consequences of such illegal measures,” claimed Iranian Foreign Ministry spokesman Abbas Mosavi, reported the state-run Tasnim News agency.