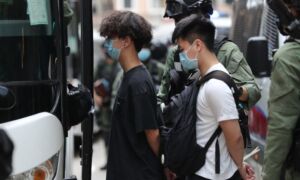 No Arrests Made During Violent Protest in Los Angeles

No arrests were made during a riot in Los Angeles on Monday, police said.

“There were no arrests and no officers injured. Minimal property damage only,” Drake Madison, a Los Angeles Police Department spokesman, told The Epoch Times via email.

Officers were blocking intersections behind the crowd.

According to CBS LA, demonstrators marched to the Los Angeles Police Department headquarters. Along the way, they smashed windows and damaged ATMs. At least one smoke bomb or pyrotechnic device was set off.

Police officers in riot gear stood outside the headquarters.

The group dispersed by 11 p.m.

Members of the group were dressed in the style favored by the far-left, anarcho-communist Antifa network. Some held signs that said “Black Lives Matter.”

At one point, a man stood in front of a police vehicle and shouted at the driver, “[Expletive] it. Do it. I [expletive] dare you. Kill me.”

Graffiti sprayed by the group included an anarchist slogan and the name Jonathan Price.

Price, 31, was fatally shot by police officers in Texas over the weekend.

The police spokesman didn’t respond when asked why no arrests were made.