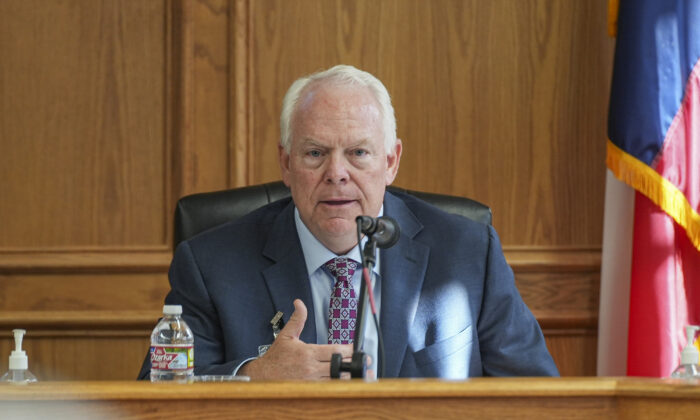 Hal Harrell, superintendent of the Uvalde Consolidated Independent School District, speaks during the first public meeting since the May 24 mass shooting at an elementary school, in Uvalde, Texas, on June 3, 2022. (Charlotte Cuthbertson/The Epoch Times)
Texas

UVALDE, Texas—The school police chief who made the decision not to immediately breach the classroom where a man with a gun was fatally shooting students was not punished on June 3 during the first meeting of the Uvalde, Texas, school district’s board of trustees since the May 24 shooting.

The board decided not to act against Pete Arredondo, the district’s police chief, during a closed-door part of the session while consulting with attorneys.

Arredondo could have been suspended or terminated, according to the meeting agenda. The board was meeting in public for the first time since the mass shooting at Robb Elementary School, which left 19 children, two teachers, and the shooter dead.

Amid growing public criticism and scrutiny directed at law enforcement and Arredondo, district Superintendent Hal Harrell told the crowd of about 30 attendees that he had no answers about why Arredondo ordered officers to hold in the hallway outside the classroom where a man identified as Salvador Ramos was firing at students and teachers. Investigations are continuing.

Arredondo was the onsite commander when officers responded to the shooting. He ordered officers to hold and wait for backup, reportedly due to the belief that the active shooter situation had evolved into a barricaded subject scenario.

A Texas Department of Public Safety official said on May 27 that it was the “wrong decision” to delay, and Texas Lt. Gov. Dan Patrick has said the decision “may have” cost lives.

During the open forum portion of the June 3 meeting, Dawn Poitevent told the trustees about her 7-year-old son’s newfound fear of attending school. Her son, Hayes, was slated to attend Robb Elementary as he moved to second grade, but the school is now permanently closed, and other schools will need to absorb its students.

She begged the trustees to keep Hayes’s cohort of 7-year-olds together at the soon-to-be expanded Dalton Elementary, which they already attend, when they start 2nd grade.

Poitevent, who lost twin daughters several years ago, said after the meeting that the tragic shooting has taken a toll on her family.

“The one thing I can say is that I have empathy in my heart for these moms. I know what it’s like to not take your babies home at the end of the day,” she said.

“This is not something I would wish upon my worst enemy. This is not what’s supposed to happen to our babies.”

Summer school is set to start on June 7, and some parents are concerned about safety measures.

Joe Ortega attended the meeting with his wife, hoping to ask the board about summer school security, although he was unaware of a requirement to sign up to speak beforehand and left without his questions being answered.

Ortega has three children at two different campuses, with his 16-year-old son preparing to start summer school next week.

“I’m going to have to speak to the teacher that he’s supposed to report to and find out directly from her what type of security they plan on having for summer school, if any,” he told The Epoch Times.

“They need to put four dedicated officers at each campus—and ones that don’t leave that campus. Four officers on every single campus, that stay at that campus and learn that campus like the back of their hand. The guy never would have gotten into school; he would have met an officer at least at the door.”

Ortega said he plans to sign up to speak at the next meeting on June 20.

Carper Capt, who also spoke during the open forum, said he was a member of the board for three terms.

“I just made a few comments about how those of us who are members of this community, we understand what a special place it is and we understand this tragedy that we’re going to have to deal with for a long time going forward. But with the grace of God, and with the support that we always have shown for one another, we’ll make it through,” Capt told The Epoch Times after the meeting.

“Because evil is at work, the devil is at work in this world, and he’ll go to work on this. He’ll try to use this to his advantage and tear us apart. That’s the way the devil succeeds, is by ripping people apart. And this is what has happened. We can’t let that prevail. We have to fight as a group. We have to stick together and show support for one another, and we can get through this.”