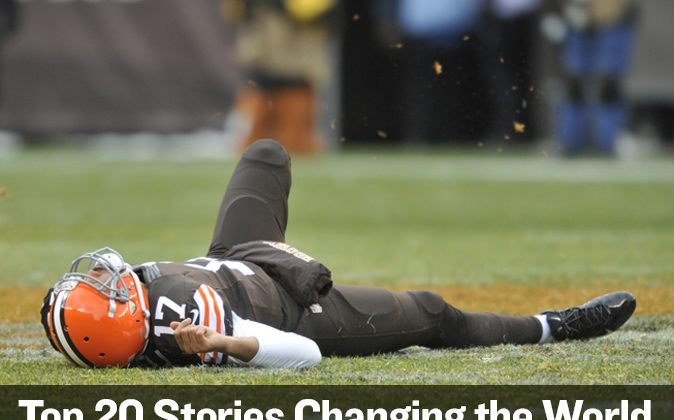 Cleveland Browns quarterback Jason Campbell lies near midfield after suffering a concussion in the third quarter against the Pittsburgh Steelers on Nov. 24. (David Richard/AP)
NBA

The NFL is America’s favorite sports league. That much has been proven.

The NBA as well as Major League Baseball aren’t far behind, but the NFL is king in a number of different ways. For instance Forbes listed the average NFL franchise value this past August at a whopping $1.17 billion—well ahead of MLB’s $744 million, and the NBA’s $509 million.

But if there is one chink in the NFL’s armor, it is this whole concussion business. And 2013 was even worse than 2012—the same year former NFL star Junior Seau committed suicide, while suffering from chronic traumatic encephalopathy (CTE). CTE, normally a condition that afflicts boxers, is thought to be brought on by numerous blows to the head.

This year the NFL, which has finally started cracking down on the once-popular helmet-to-helmet blows, reached a settlement with numerous former players for a staggering $765 million to compensate for concussion-related brain injuries.

Even more damaging though was a documentary PBS aired this fall called “League of Denial,” which detailed how the NFL knew about the long-term effects of concussions and what lengths it went to in order to cover up that information.

The NHL is in similar circumstances, though on a smaller scale. The league has been sued (in November) by several former players for negligence and fraud over head injuries that occurred on the ice.

What does this mean going forward? Slowly, parents aren’t letting their children play rough sports like football—at least at a young age.

NFL star Drew Brees recently stated that even he won’t let his sons play football until they’re in their teens.

It’s a sign of the times. Though the sport looks all right in the short-term, lawsuits, as well as a shrinking pool of participants can wear down any league or sport.