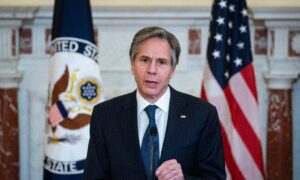 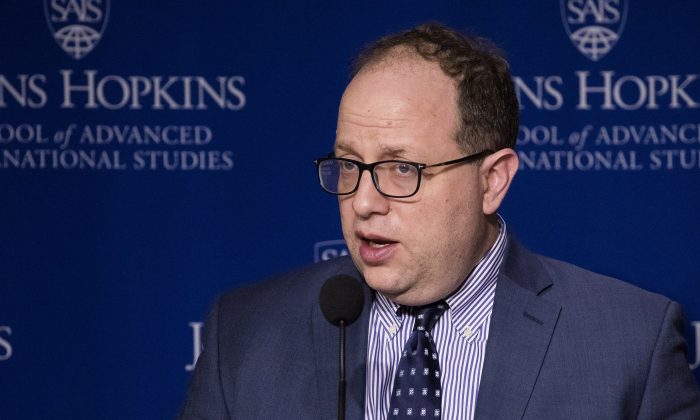 Dan Blumenthal is the director of Asian studies at the American Enterprise Institute and previously advised the U.S. government on China issues for over a decade. He said that while the United States is locked in a strategic competition with China around the world, an effective pushback cannot be a purely military endeavor, but must include an organized effort to expose abuses by the Chinese communist regime.

“The No. 1 weapon we should never give up is human rights,” said Blumenthal, who delivered a keynote speech at the SAIS Asia Conference on March 30. “[Human rights] is a powerful tool for the United States to stay in the center in China and to stand with those who are oppressed.”

Blumenthal pointed to the Chinese regime’s persecution of Uyghurs, the Muslim ethnic group in China’s Xinjiang region, as a topic that should be targeted by U.S. human rights efforts. Doing so could help decouple China’s strategic relations with Muslim majority countries such as Indonesia, Malaysia, and the Gulf states, all of which are at the frontier of China’s global expansion of power.

Blumenthal said that the United States should directly confront and expose human rights abuses in China.

“China’s policies in Xinjiang are some of the most oppressive toward the Muslims in the world, yet few people know about them,” Blumenthal said, arguing that the U.S. State Department needs to “step up to the competition” and set up an information office similar to the ones established in the Cold War to highlight bad behavior by China.

Blumenthal’s comments follow Trump’s announcement on March 22 that Bolton, a former U.S. ambassador to the U.N., will replace H.R. McMaster as national security adviser, starting April 9. Bolton serves as a senior fellow at the American Enterprise Institute, and his views closely align with those of Blumenthal on a variety of issues, particularly in regard to U.S.–China policy.

“Our key goal is to keep China on the defensive … to force China, whose economic growth is slowing down, to choose between using resources on suppressing domestic concerns or to go out and compete with the United States in East Asia,” said Blumenthal.

When asked about the specific steps he would like the administration to pursue, Blumenthal said that the United States should directly confront and expose human rights abuses in China. In addition, support should be increased for existing information platforms such as Radio Free Asia and Voice of America, which have been providing the Chinese audience with information they would not otherwise receive from the Chinese regime’s media.

Both Blumenthal and Bolton share the view that China is the driving force behind North Korea’s quest for nuclear weapons. Like Bolton, Blumenthal advocates a hardline policy to confront the perceived Chinese support for North Korean aggression.

“What we need to do, and what we have done effectively, is to scare China,” said Blumenthal, during a Sept. 5, 2017, discussion. “The policy adopted by the Trump administration right now is to tie North Korea as a liability for China, to make China feel so much pain for its relations with North Korea, at some point China would say, enough is enough.”