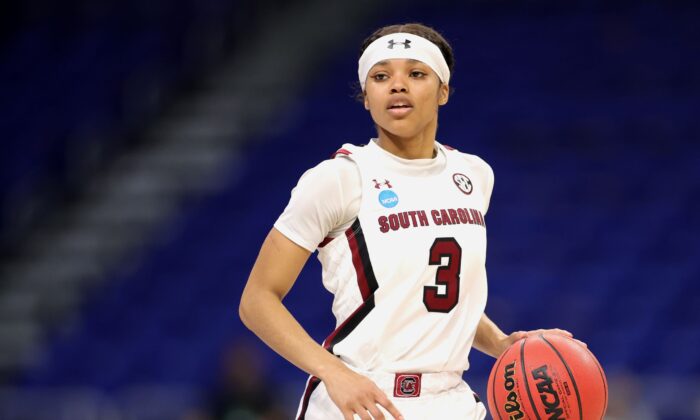 Destanni Henderson #3 of the South Carolina Gamecocks controls the ball during the second half against the Mercer Bears in the first round game of the 2021 NCAA Women's Basketball Tournament at the Alamodome in San Antonio, Texas, on March 21, 2021. (Carmen Mandato/Getty Images)
Sports News

No. 1 South Carolina Cruises to 72–41 Win Over South Dakota

SIOUX FALLS, S.D.—South Carolina shot 46.7 percent from the field and made quick work of South Dakota on Friday night at the Mammoth Sports Construction Invitational, but it was the stingy defensive effort that led the No. 1 Gamecocks to a 72–41 win over South Dakota.

“We’re probably a far better defensive team at this stage of the game,” Dawn Staley said. “I think we did a really good job of making them second-guess, or making them play a little bit faster than what they wanted to play. We just imposed our defensive will on them.”

The Gamecocks (2–0) built a quick 10–0 lead, and South Dakota didn’t get its first field goal until Liv Korngable scored with just under three minutes to play in the first quarter. Korngable finished with 24 points to lead the Coyotes.

South Dakota (0–2) got the home crowd into things when they cut it to 43–30 on a Chloe Lamb basket midway through the third quarter. But Henderson hit back-to-back 3-pointers and the lead ballooned to 21 at the end of the third quarter.

“We were trying to get to the point where we could cut it down to under 10 and build from there,” South Dakota head coach Dawn Plitzuweit said. “But when they impose their will, there’s not a whole lot you can do about it.”

The Gamecocks got the lead to as many as 32 in the fourth quarter when Bree Hall hit one of South Carolina’s eight 3–pointers.

“We’ve got a lot of 3-point shooters on our team,” Henderson said. “The ball will find who needs to shoot it and I feel like that’s what I did tonight.”

Highly recruited South Carolina freshman point guard Raven Johnson left the game with 3:57 to play in the first quarter. The No. 1 point guard and No. 2 overall player nationally last season did not return to the floor and was wearing a knee brace on the bench in the second half.

Stats of the Night

Although South Carolina won by 31 and shot 46.7 percent from the field, they turned it over 20 times. The Gamecocks outrebounded South Dakota 49–25.

It was the second straight year South Carolina played in Sioux Falls as the No. 1 seed against South Dakota. After beating the Coyotes last year, South Carolina won 13 of its next 14.

South Carolina: Hosts Clemson on Wednesday before heading to the Bahamas for the Women’s Battle for Atlantis tournament.

South Dakota: At Drake on Monday.