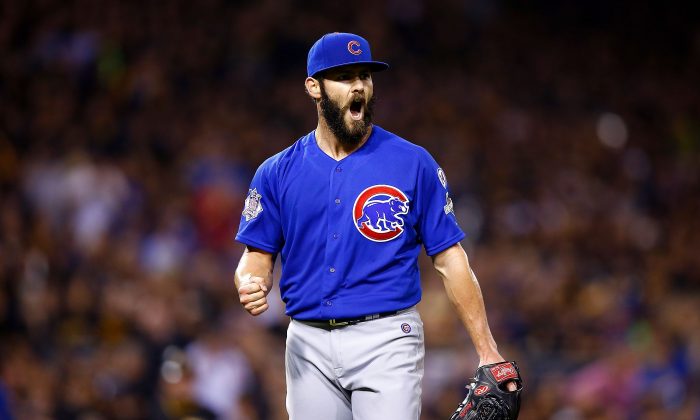 Cubs ace Jake Arrieta has the team in the NLDS after a brilliant complete game shutout of the Pirates in the wild card game. (Jared Wickerham/Getty Images)
Baseball

NLDS Previews: Why the Mets, Cubs Will Advance

The NL Division series start Friday with two distinct matchups: a pitching-heavy affair between the Mets and Dodgers in one, while the other features the longtime rivalry between the Cubs and Cards.

The Mets, much like the Blue Jays and Rangers, made their move mid-season by acquiring hitters Yoenis Cespedes, Juan Uribe, and Kelly Johnson. The transactions jump-started their offense and they raced past the Nationals to take the NL East. Meanwhile the Dodgers were in it all season long with that $300 million plus payroll of theirs—not too mention a pretty top-heavy rotation. Here’s how they match up:

Here’s the million dollar question: do you take the Mets slightly deeper, younger staff or the Dodgers unbelievable 1-2 punch of Clayton Kershaw-Zack Greinke? That all hinges on whether Kershaw is on or not in the playoffs—historically he has not. The three-time Cy Young winner has a career postseason ERA of 5.12—more than double his regular season career ERA of 2.43. Advantage: Push.

Cespedes has been on fire since coming over to the Mets (.287 average, 17 home runs, 44 RBIs in 57 games) which helped to completely change the complexion of their lineup. The return of David Wright (.289 average in 38 games) and emergence of rookie Michael Conforto (.506 slugging percentage in 174 at-bats) also have helped.

The Dodgers finished just behind the Mets in runs scored (683-667) though they struggled in the second half. All-Star outfielder Joc Pederson struggled mightily after the Home Run Derby, hitting just .178 with six home runs the rest of the way, while Adrian Gonzalez hit just .264/.344/.427 after the break and he’s usually either hitting third or fourth. Slight Advantage: New York.

There’s little to separate these teams in the field—at least according to the advanced fielding metrics at Fangraphs.com. The site lists the Mets as 17th in baseball with a plus-2.3 in Defensive Runs Above Average (a measure that combines fielding runs plus positional adjustment), while the Dodgers are just in front of them at 15th with a 5.0 score. Advantage: Push.

The Dodgers have far and away the major’s highest payroll, yet at the same time they’ve really emphasized good team chemistry and are probably motivated by the fact that they’ve been bounced before the World Series two straight years. The Mets, meanwhile, are playing with house money. No one expected them here before the season began. Advantage: Push.

It all hinges on Kershaw, who likely will get two starts in this series. Can he reverse his playoff slump? Here’s guessing no. Prediction: Mets in five.

The teams with the first- and third-best records in the game square off here and though it’s not Yankees-Red Sox, this is an intense rivalry.

Another case of which-would-you-rather? The Cubs have quite a 1-2 punch with Jake Arrieta-Jon Lester, though the Cardinals Adam Wainright-less staff is surprisingly deeper. But with the way Arrieta pitched Wednesday (CG shutout) combined with Lester’s postseason credentials (6–4, 2.57 ERA in 14 games), Chicago looks a little better. Slight Advantage: Chicago.

The Cubs have power—all nine position players have at least 10 home runs—but like the Astros, they strike out a lot too, 1,518 times, which puts them as the only team over 1,400. Still, they score more than St. Louis (689-647) and the duo of Anthony Rizzo and Kris Bryant are more imposing than anything the Cardinals can throw out there—especially with postseason hero one-time Silver Slugger winner Yadier Molina banged up, with a torn left thumb ligament. Advantage: Cubs.

Again, Molina’s health is going to be paramount for the Cardinals. The seven-time Gold Glove winner is going to at the least be limited in throwing out would-be base-stealers and Chicago was ninth in the league in steals. That aside, Fangraphs.com ranks the Cardinals as the 11th-best defensive team with a plus-13.7 in Defensive Runs Above Average (mainly due to Molina and RF Jason Heyward) and the Cubs 9th at 17.4. Slight Advantage: Cubs.

The Cubs are at 107 years and counting since their last World Series title, while the Cards are at 4. Cubs manager Joe Maddon is generally considered the best manager without a World Series ring. Slight advantage: Cubs.

Much like the other NL series will depend on which Kershaw shows up, this one hinges on Molina’s health. He’s the heart and soul of the team and maybe he can still throw with his right hand, but it can’t be easy to hit with a hurt thumb. Besides, Arrieta and Lester will be an imposing 1-2 punch at the top of the rotation. Prediction: Cubs in five.