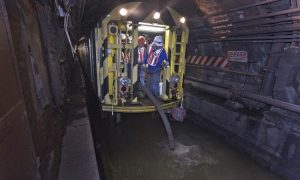 NJ toddler shoots friend: Police said that a New Jersey toddler shot his neighbor friend, a 6-year-old boy, in the head with a .22-caliber rifle on Monday night, leaving the boy in serious yet stable condition.

It was unclear if the 4-year-old toddler pulled the trigger or if the weapon accidentally discharged while the boys were playing at a home in Toms River, located around 70 miles from New York City.

“The young boys were playing,” Police Chief Michael Mastronardy told AFP. “The four-year-old went into the house, retrieved the rifle from within the house: a .22 caliber rifle.” He added, “A shot went out, and the six year old was struck in the head.”

Police said the 4-year-old shot his friend at a distance of around 40 feet. The victim was described as being still in “serious” condition after he was airlifted to Jersey Shore University Medical Center in Neptune.

“Right now, we’re keeping this child in our prayers, and I ask everyone to do the same,” he said.

Ronald Holt told the Asbury Park Press and Star-Ledger newspapers that the victim was his son, Brandon, the youngest of his three children. Reached by The Associated Press, he declined to comment.

Neighbors in the quiet, residential part of the Ocean County community identified the children as boys. One said their families had not lived in the neighborhood long and she did not know them well.

“I’m sad for the children involved and their families, but I’m angry with whoever owns that gun and allowed a little child to get hold of it. A 4-year-old can’t load a gun,” said Debi Coto, who lives a few doors down.

“I had just been telling my sister how nice it is to see kids playing together and enjoying themselves, and then this happens,” she said.