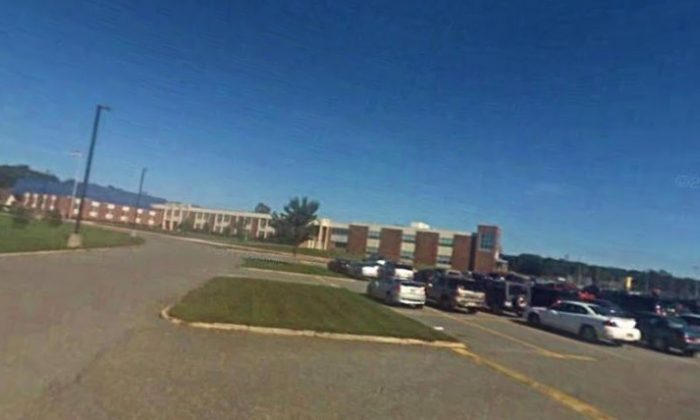 Buena Regional High School wrestler Andrew Johnson had a cover over his hair during a match on Dec. 19, 2018. (Google Street View)
US News

New Jersey’s athletic association has sidelined the referee who told a high school student to cut his dreadlocks or forfeit his wrestling match.

Michael Cherenson, the spokesman for the New Jersey State Interscholastic Athletic Association, said his organization reached out to groups that assign wrestling referees. He said they have “all agreed” not to assign Alan Maloney, the referee, to any more matches until a review is finished, The Associated Press reported on Dec. 23.

Buena Regional High School wrestler Andrew Johnson had a cover over his hair during a match last week. The referee said it was a problem and offered him an ultimatum: cut the hair or he can’t compete.

Epitome of a team player ⬇️

A referee wouldn't allow Andrew Johnson of Buena @brhschiefs to wrestle with a cover over his dreadlocks. It was either an impromptu haircut, or a forfeit. Johnson chose the haircut, then won by sudden victory in OT to help spark Buena to a win. pic.twitter.com/f6JidKNKoI

Video footage taken from an SNJ Today reporter, Mike Frankel, showed Johnson’s hair being cut just minutes before his wrestling match. Johnson won, but he appeared distraught, according to AP.

Many people criticized the referee’s move, describing it as “racist,” and Gov. Phil Murphy weighed in on the controversy, calling it disturbing.

“Deeply disturbed that Andrew Johnson, a student at Buena Regional H.S., was forced to choose between keeping his dreadlocks and competing in a wrestling tournament,” he tweeted.

In a statement on Dec. 22, the New Jersey State Interscholastic Athletic Association said the incident will now be investigated.

“Further, NJSIAA can confirm that those groups that assign high school wrestling referees in New Jersey will not assign the referee in question until this matter has been thoroughly reviewed. This will help to avoid disruption of events for student-athletes,” Larry White, the executive director of the organization, said in a statement.

“Regulations regarding hair length and legal hair covers for wrestlers are provided by the National Federation of State High School Associations,” the statement added. “At this point NJSIAA is working to determine the exact nature of the incident.”

The National Federation of State High School Associations said wrestlers’ hair cannot fall past their earlobes. If it does, they have to wear a cap, according to the New York Daily News.

But Jordan Burroughs, a 2012 Olympic gold medalist in wrestling, said he’s never seen anything like this happen in 25 years of competing.

“This is nonsense,” he tweeted, adding that the coaching staff and parents should have intervened, AP reported.

A woman who answered the phone at Maloney’s home said the incident was being blown out of proportion, adding he was just following rules.

Howie O’Neill, a member of the Southern Chapter of the New Jersey Wrestling Officials Association, told Philly.com that Maloney told Johnson that he couldn’t compete without a legally sanctioned cover for his hair. He said the covering has to attach to his headgear, and Johnson’s covering didn’t.

He suggested that Johnson wasn’t forced to cut his hair.

“Nobody made him cut his hair,” O’Neill said. “It was his choice to cut his dreadlocks.”

“The student-athlete made the decision to have his hair cut, at that moment, in order to avoid a forfeiture of the match,” Cappuccio said.

Wrestling official Ron Roberts said he went to Buena high to tell coaches and athletes of the new rule change, telling two athletes with dreadlocks that they would have to get a proper cover for their hair. One of them said they would cut their hair, and Johnson said he would get the proper equipment before taking the mat, Roberts said.

“It never should have come to this,” Roberts told Philly.com. “It should have been addressed long before coming to this. You have to take the mat with the proper equipment.”