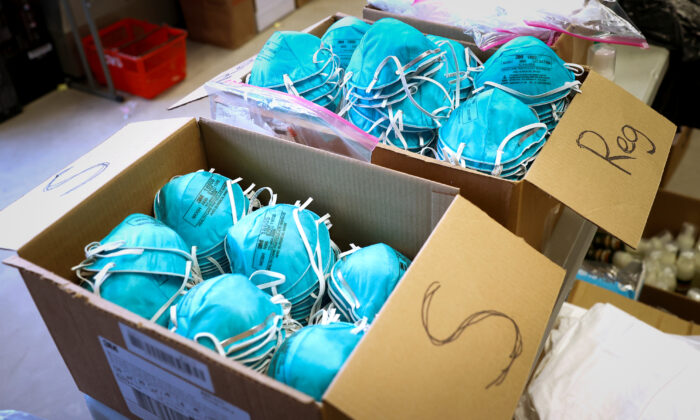 Boxes of N95 protective masks are seen in a file photograph. (Mike Segar/Reuters)
By Simon Veazey

New Jersey state police are now authorized to seize medical supplies and equipment such as ventilators and masks from private companies if they are needed in hospitals as they battle with COVID-19.

The move was followed today by a similar announcement by New York Gov. Andrew Cuomo, who said state officials will be able to seize ventilators from hospitals and other institutions that officials decide don’t need them.

With 646 deaths, New Jersey has the second-highest death toll among the states, trailing only neighboring New York, where today the death toll hit 2,935.

Unsurprisingly, the New Jersey cases are heavily skewed into the heavily populated eastern edge that borders Manhattan and forms part of the New York Metropolitan Area—the largest urban area in the United States.

“We have a tough, tough road ahead of us and it’s already proven to be a tough road. But look at the lives, the hundreds of lives lost. The numbers are going to keep going up,” Gov. Murphy said in a statement.

Officials said that they hoped that companies would step forward without the state interventing, but that they would step in if needed.

Four FEMA field hospitals are to be set up in the state.

Many states, along with many European countries, are rushing to procure and manufacture ventilators and personal protective gear before the COVID-19 peak sweeps in.

In New York, some officials have said as many as 40,000 ventilators will be needed. New York currently has around 12,700 ventilators, according to figures given by state officials in recent days, and it has ordered 17,000 more.

“I don’t know after Sunday if we’re going to have what we need, and that’s just the ventilators” de Blasio told CNN, adding that New York City can “only get to Monday or Tuesday at this point. We don’t know after that.”

New York has, by far, the most cases, hospitalizations, and deaths in the country.

A number of clothing companies such as Under Armour, Brooks Brothers, MyPillow, Honeywell, and Gap have shifted production to masks.

President Trump last week used the Defense Production Act to lean on GM to speed up the production of ventilators it was already contracted to make for the government.

In a statement, Trump said, “Our negotiations with GM regarding its ability to supply ventilators have been productive, but our fight against the virus is too urgent to allow the give-and-take of the contracting process to continue to run its normal course. GM was wasting time.”

GM has partnered with Ventec Life Systems, a manufacturer of the ventilators, to expand the production capacity for the devices.

“Ventec, GM and our supply base have been working around the clock for weeks to meet this urgent need,” GM stated in an emailed response to Trump’s announcement. “Our commitment to build Ventec’s high-quality critical care ventilator, VOCSN, has never wavered.”