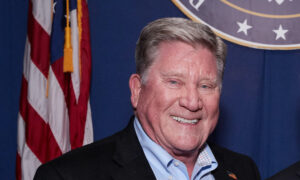 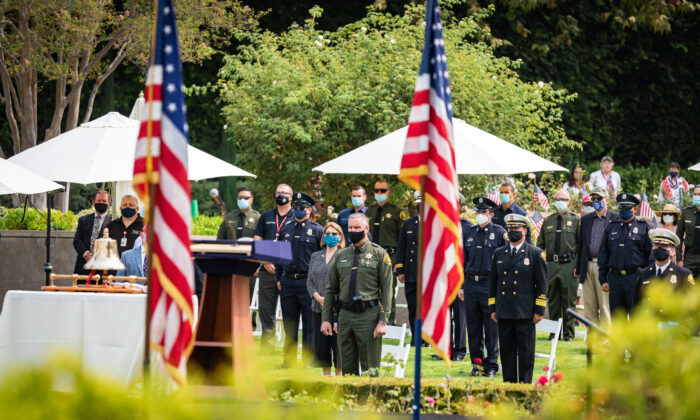 YORBA LINDA, Calif.—The Richard Nixon Foundation in Yorba Linda held its annual 9/11 commemoration ceremony on the morning of Sept. 11, with the event taking a different shape due to the COVID-19 pandemic.

The ceremony was held in the Pat Nixon Amphitheater, an outdoor area on the grounds of the Nixon Presidential Library and Museum. In order to follow social distancing rules, the event was invite only, with a limited number of sheriff’s deputies and first responders in attendance.

To cater to the up to 800 member audience the event has had in previous years, the foundation livestreamed the ceremony for the public to watch.

The event began with a bagpipe performance by the Orange County Fire Authority (OCFA) Pipes and Drums, followed by a prayer and the national anthem.

The first to give a speech was Nixon Foundation Executive Vice President Jim Byron, who introduced various county luminaries and detailed the foundation’s history of honoring 9/11 annually.

The event’s main speakers included OCFA Chief Brian Fennessy and Orange County Sheriff Don Barnes, who both spoke about the bravery of the first responders who gave their lives on Sept. 11, 2001.

“Nineteen years ago today, at 8:46 in the morning, the worst terrorist attack in U.S. history began. A hijacked airliner slammed into the north tower of the World Trade Center in lower Manhattan. It was the beginning of the day that changed our world forever,” Fennessy told those in attendance, who were sitting in distanced chairs on the grass.

“What was intended for evil on Sept. 11, 2001, made our country stronger and more united.

“On that day, there were acts of heroism, courage, and compassion. Without hesitation, firefighters ran into the burning buildings in New York City to do what they had to do to save lives.”

Sheriff Barnes spoke next. He visualized the wreckage and despair that the attack brought down on the country, but then detailed the great amount of unity that took place as Americans joined together to help one another.

“The horrible day is etched in the minds and hearts of all Americans,” Barnes told the audience.

“We will never forget, and always mourn, those who perished as a result of that attack upon our country. Almost two decades later, the memories of that day are still vivid: the fires, the wreckage, the rubble, the pained look on the faces of those who lost loved ones.

“Equally as memorable was the prevalence of the American flag. Across our whole United States, Americans began flying the Stars and Stripes on their homes, on street corners, at their businesses, on their cars, and even on their clothes.

“In that moment, the flag symbolizes our defiance against those who attacked us, our grief for those who lost their lives, and our unity as a nation. And that moment, we stood together as proud Americans resolute in the defense of our values.”

The program also included a presentation of the colors by the Orange County Sheriff’s Department, patriotic musical performances by the Orange Community Master Chorale, and the ceremonial ringing of the “last alarm” by the OCFA.