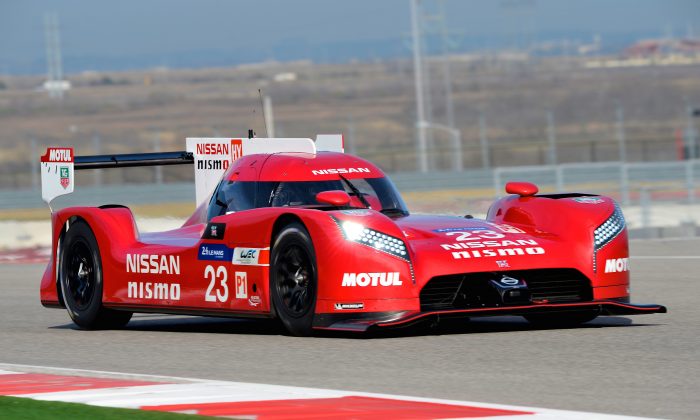 The unorthodox car appeared in as pair of commercials broadcast during the big game, where they would be seen by more than 100 million Americans. This public introduction will be followed up with a week at the Chicago Auto Show, Feb. 14–22, where it will be displayed with other Nissan racing vehicles.

Nissan also released photos from testing and some mechanical specifications of the car, and it is definitely the product of “outside-the-box” thinking.

While every other bespoke racing prototype in every major series follows the common architecture of having the engine behind the driver and ahead of the rear wheels, the new Nissan has its 3-liter twin-turbo V6 ahead of the driver.

While all its competitors deliver most of the power through the rear wheels (using electric-powered all-wheel-drive for brief bursts) the GT-R LM funnels all the power of the V6 and the electric motors through the front wheels. These electric motors are powered by batteries which are recharged every lap from frictional energy scavenged from the braking system—free electricity and free speed.

The GT-R will race in the LMP1-Hybrid class in the FIA World Endurance Championship, facing competition from Porsche, Audi and Toyota. LMP1-H is the fastest class of sports car in the world, where high-tech machinery generates up to 1000 horsepower and top 200 mph while using one-third less fuel than their predecessors from two years before.

The LMP1 class has the most open rules of any major racing series. Designers and engineers can build almost anything they can imagine—cars powered by diesel motors and flywheels, gasoline engines and capacitors, or like the GT-R, a gas engine and flywheels with front-wheel drive. It is this design freedom which drew Nissan to the hotly contested class.

“This is innovation that excites,” said Shoichi Miyatani, president of NISMO, in a press release. “Sustainability is at the top of our agenda, and the technical regulations for Le Mans give us the freedom to pursue new ideas in this area.

“We want to win and we have the knowledge to do that—for our customers, our employees and our fans. The competition is exceptionally strong and we are excited by the challenge.”

Designer Ben Bowlby, responsible for the triangular DeltaWing and Zeod prototypes, departed in yet another unusual direction with the GT-R LM. The GT-R has most of the weight and most of the aerodynamic downforce concentrated on the front axles, which do 100 percent of the drive duties. This means the front tires must handle all the forces of acceleration and braking as well as cornering. The front tires are 14 inches wide; the rears a mere nine inches.

This might sound like a bad idea, especially since some of its competitors find the driven tires are overstressed merely by the ferocious acceleration these hybrid power plants provide. But Bowlby has a knack for making the apparently illogical work, as attested to by the success of his DeltaWing, a car with front tires only four inches wide and twenty inches apart.

There is a provision for some power to be sent to the rear wheels, per Racer.com writer Marshall Pruett, who reports that a slender driveshaft links the motor to two elevated (clear of the airflow) rear transmission units which connect to the rear wheels via tiny halfshafts. obviously, most of the projected 1500 horsepower is expected to turn the front tires.

The chassis of the GT-R LM, except for its layout, follows standard practice: a carbon-fiber construction deigned both to be nearly indestructible in a crash and also optimized aerodynamically so he car can slip through the air with minimal drag while still keeping lift low enough that it doesn’t take off like a plane, while also developing enough downforce that the car’s weight will more than double at speed.

While Ben Bowlby designs cars that are different because he looks for new solutions to the basic problems of getting a car around a track as fast as possible, the GT-R KM’s unique configuration might owe more to Nissan’s desire to link road and race cars.

“The GT-R is our flagship road car. This, the ultimate GT-R, continues a sporting bloodline that goes back three decades with NISMO, the motorsport and performance arm of Nissan said Roel de Vries, global head of Marketing and Brand Strategy at Nissan. Le Mans drives innovation, so success on the track will lead to greater innovation in our road car range. We are the new kids at Le Mans. Our opponents are the best in the world, but we are ready.”

The GT-R LM will first see competition at the WEC Six Hours of Silverstone on April 12. Tickets are available through the Silverstone website.