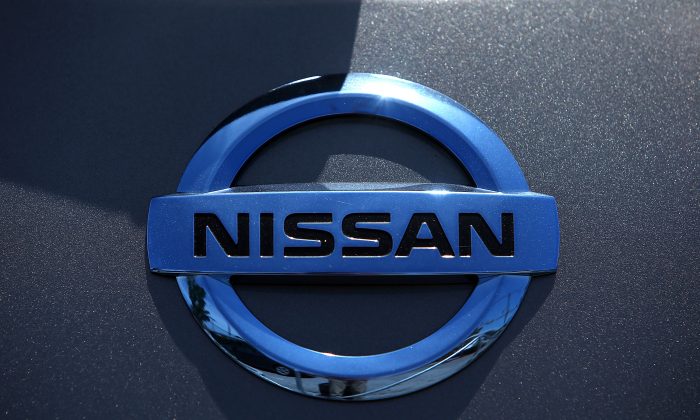 The Nissan logo is displayed on a brand new Nissan car at Nissan Marin on May 1, 2014, in San Rafael, California. (Justin Sullivan/Getty Images)
Business & Markets

DETROIT—Nissan says it’s recalling more than 1,800 Infiniti SUVs in the U.S. for an air bag problem that could send shrapnel into the passenger compartment.

The recall covers some QX56 SUVs from 2013 and the QX80s from 2014. The company says inflators made by troubled parts supplier Takata Corp. were built with an incorrect outer baffle part. That can cause pressure to build up, and the inflators can rupture if driver’s side air bags are deployed.

The latest air bag problem, according to Takata, affects only GM and Nissan vehicles, and it’s separate from previous recalls covering 8 million vehicles in the U.S. But the new recall raises the possibility that the company’s air bag problems are growing.

Nissan has no reports of injuries from the baffle problem. It was discovered after General Motors recalled 33,000 Chevrolet Cruze compact cars for the same problem in June. The Infiniti recall is part of a larger global recall of 260,000 Nissans announced last week.

Parts shortages have delayed replacement of recalled air bags. But the National Highway Traffic Safety Administration said Friday night that Takata has agreed to add two production lines by early next year. The agency said it wasn’t sure that would be enough and it would determine if more is needed.

The previous recalls are being done because prolonged exposure to high humidity can cause inflators to malfunction and explode with too much force, blowing apart metal canisters and sending metal shards into the car. Safety advocates say four people have died due to that problem, which affects 10 different automakers.

Some automakers have limited their recalls to a small number of high-humidity areas, but lawmakers and others are demanding that recalls be expanded nationwide. Covered are cars made by Honda, Nissan, Chrysler, Ford, Mazda, Subaru, Mitsubishi, Toyota, BMW and General Motors.

NHTSA is investigating the humidity issue and could expand the size of the recall. Lawmakers say there are about 30 million vehicles on the road in the U.S. with potentially defective Takata air bags.

Takata, which said it will work to comply, has until Dec. 1 to turn in the information or face $7,000 daily fines.

The world’s second-largest air bag maker with 22 percent of the market, Takata has been plagued by problems with its air bags since at least 2001. That year, Japanese automaker Isuzu reported an exploding air bag in the Isuzu Rodeo and Honda Passport and quietly recalled three affected vehicles, according to a class-action lawsuit against Takata and automakers that was filed this week in Florida.

Takata has given various explanations for the issue, including humid conditions at its factory in Mexico; improper welds; trouble with stamping equipment; and an improper amount of generant, which produces the gas that makes air bags inflate.