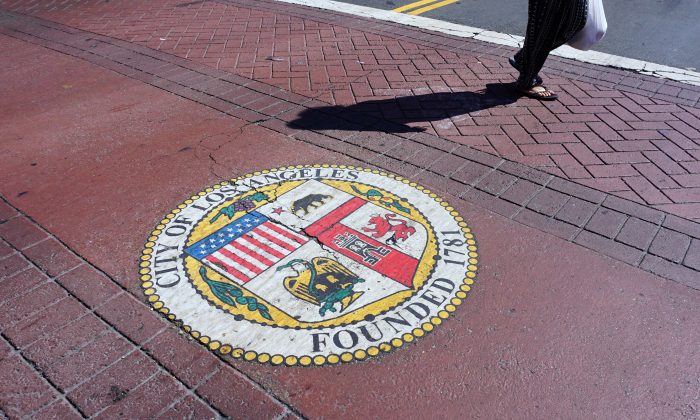 A woman crosses a street in front of City Hall in Los Angeles on Aug. 22, 2017. (FREDERIC J. BROWN/AFP/Getty Images)
Politics

The Trump administration won a rare legal victory in its campaign against so-called sanctuary cities, when a federal appeals court ruled it may withhold federal funding under a specific program should a jurisdiction refuse to cooperate with U.S. Immigration and Customs Enforcement (ICE).

On July 12, a three-judge panel of the 9th Circuit Court of Appeals gave the administration the green light to withhold federal funding to Los Angeles under the Community Oriented Policing Services (COPS) grant program. The city applied for a little over $3 million under COPS in 2017 to hire 25 officers with the goal of “building trust and respect” through community policing. The city didn’t indicate on its application that immigration-related matters would be a priority for its police department.

Los Angeles became the first U.S. sanctuary city in 1979, when its police department issued Special Order 40, a document that forbids police officers from inquiring about the immigration status of individuals not suspected of crimes.

White House press secretary Stephanie Grisham hailed the court for reversing “a lawless decision that enabled Sanctuary City policies, putting the safety and security of all Americans in harm’s way.”

“Sanctuary Cities knowingly release criminal aliens out of their jails and back into our communities, instead of cooperating with ICE to ensure they are kept in custody and safely removed from the United States. Many innocent Americans are injured, maimed, or killed as a result of Sanctuary City policies,” Grisham said.

“This ruling upholds the right of the Department of Justice to ensure discretionary grants under its control are not being used to subsidize these jurisdictions’ open assault on law-abiding Americans and their loved ones.”

Los Angeles had sued, claiming it was treated unfairly because it chose not to focus on immigration. The city argued the new scoring system used by the Trump administration to award grants was unlawful because it violated the separation of powers doctrine and the Constitution’s spending clause, and was arbitrary and capricious under the federal Administrative Procedure Act.

The case was City of Los Angeles v. Barr, an appeal of a ruling by Pasadena, California-based U.S. District Judge Manuel L. Real. (Real, appointed in 1966 by President Lyndon Johnson, died on June 26 at 95 years of age.)

“Cooperation relating to enforcement of federal immigration law is in pursuit of the general welfare, and meets the low bar of being germane to the federal interest in providing the funding to ‘address crime and disorder problems, and otherwise … enhance public safety,’” Judge Sandra Ikuta wrote in a majority opinion, joined by Judge Jay Bybee. Besides, she noted, some applicants to the COPS program had been approved without indicating a desire to focus on immigration.

In 1994, Congress created the Public Safety Partnership and Community Policing Act, which established the COPS grant program. The point of the program was to add beat cops to communities to enhance relations with the public and create “community partnerships.” For years, Congress has been funding the deployment of more police officers on the streets in states and localities.

The COPS program is administered by the U.S. Department of Justice, which, under President Donald Trump, awards extra points in its scoring process to police agencies that indicate a desire to cooperate with ICE. Then-Attorney General Jeff Sessions announced after the grant decisions were made that 80 percent of new COPS grantees had “agreed to cooperate with federal immigration authorities in their detention facilities.”

In a dissent, Judge Kim McLane Wardlaw wrote that in 2017, the Trump administration “decided to usurp the COPS funds for its own immigration policy directives” as part of a larger effort “to press state and local police into federal immigration enforcement.”

“If this decision were to stand, this or another administration could add other conditions, favoring jurisdictions that criminalize abortions or allow teachers to have guns in classrooms,” Feuer said, according to The Los Angeles Times.