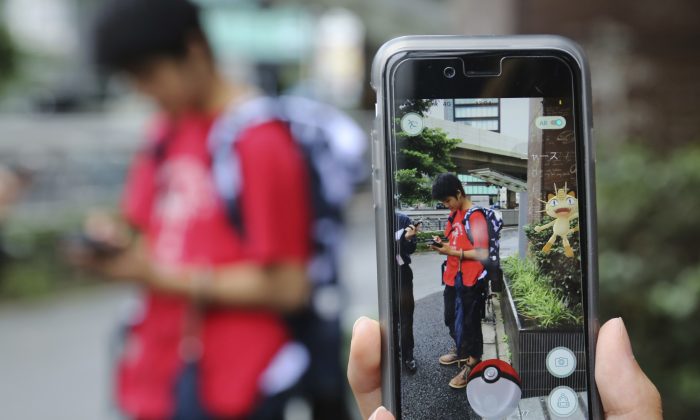 FILE - In this July 22, 2016 file photo, Japanese students play "Pokemon Go" in the street as its released in Tokyo. Japanese video game maker Nintendo Co. has sunk into a loss of 24.53 billion yen ($232 million) for the fiscal first quarter through June, 2016 despite the global success of the “Pokemon Go” augmented reality game. The result Wednesday, July 27, 2016, was worse than the 673 million yen ($6.4 million) profit forecast by analysts surveyed by FactSet. (AP Photo/Koji Sasahara, File)
Business & Economy

TOKYO—Japanese video game maker Nintendo Co. sagged into a loss of 24.53 billion yen ($232 million) for the fiscal first quarter through June, despite the global success of the “Pokemon Go” augmented reality game.

The result Wednesday was worse than the 673 million yen ($6.4 million) profit forecast by analysts surveyed by FactSet. The manufacturer of Super Mario games and the Wii U console had an 8.3 billion yen profit the same quarter a year ago.

Nintendo has warned the “Pokemon Go” perk will be limited. The Pokemon Co., a Nintendo affiliate, will get licensing fees and other compensation for the mobile game distributed by Niantic Inc., but that won’t have much impact on Nintendo income, according to a company statement last week.

The “Pokemon Go” game became available after the first quarter ended, anyway, and to play it basically is all free. But some investors are expecting a boost for Nintendo as the Pokemon craze encourages other types of sales, such as games and other content of not just Pokemon but other Nintendo products.

Nintendo’s shares have see-sawed since the game’s release earlier this month, as markets flip-flopped between hope and disappointment for the biggest hit in games in years. It closed at 22,305 yen, down 5.5 percent in Tokyo.

Nintendo’s earnings have suffered from lagging sales of its game consoles, including the Wii U and the 3DS handheld. The new console it has promised, codenamed NX, hasn’t gone on sale yet.

After years of scoffing at the threat from smartphones, Nintendo did an about face last year and entered that sector.

Pokemon Go is definitely the first success it has scored since that decision, and it underlines Nintendo’s potential. The game, which has players looking for Pokemon creatures in their real-life wanderings, is a good match for the classic Pokemon story.