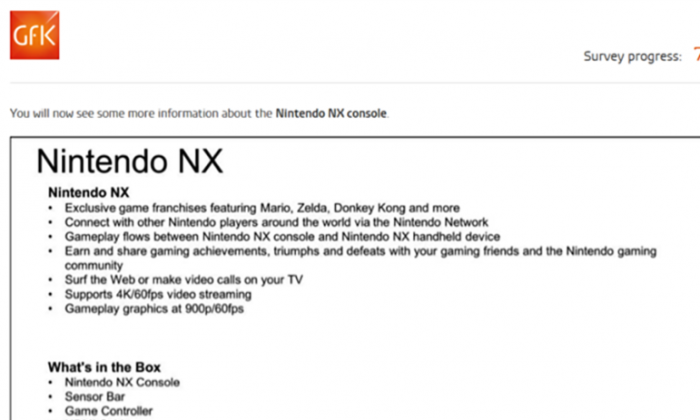 There’s been scant details about the Nintendo NX, the next console from the company, but in the lead-up to the E3 conference in June, more and more rumors are likely to leak. That includes a survey that’s made the rounds online in the past few days.

A marketing survey was leaked on NeoGAF, referring to the NX as a console as well as a handheld device, reported EuroGamer, which noted that its writers have “spoken to individuals who responded to the survey and can verify it exists.”

It’s unclear if Nintendo actually commissioned the survey, and it’s also unclear if the information discusses the final product.

Twitter user and gaming enthusiast Liam Robertson also posted information about the NX to his account. The information comes from a survey commissioned by GFK, a Nintendo client. He didn’t take the survey himself, but he said it was sent to several people, and the image he posted online came from one of them.

As some websites have noted, the one thing that sticks out is the 900p resolution at 60fps, which is relatively low. A number off Wii U games run at 1080p, making the survey’s claim stick out as a bit strange.

IGN reported that the survey mentions a Netflix-like, subscription-based game service that offers access to about 150 titles that are changed on a regular basis. New games are added to the catalog six to 18 months after they get released.

However, some have noted that the survey might just be a smokescreen to gauge responses about the NX’s potential specifications.

The console has been described the GFK as being part handheld. “Gameplay flows between Nintendo NX console and Nintendo NX handheld device,” it says.

Nintendo hasn’t publicly commented on the survey or any official specs.