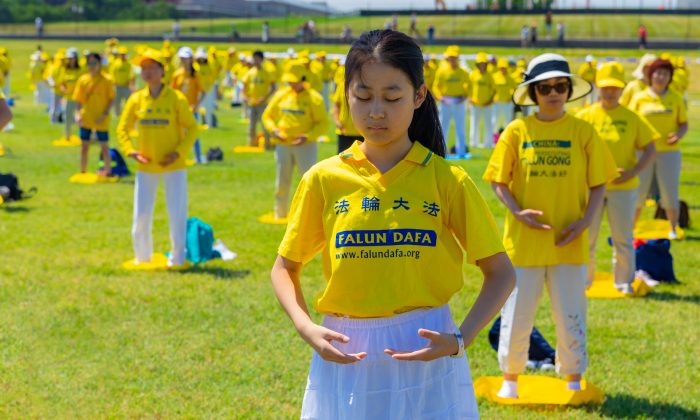 WASHINGTON—Nineteen years are more than enough for a generation to grow up. Yet the same generation of people are still coming back to Washington, around the same day each year, to call for an end of the now 19-year-long persecution in China of the spiritual practice of Falun Gong. Some bring along their children born during these years.

This year, about 600 local Falun Gong practitioners and those traveling from New York, New Jersey, and Boston gathered again at the Washington Monument to hold one-day-long activities that included Falun Gong exercise demonstrations, a rally, and a candle light vigil.

Read More
Under a Bright Sky, a Call to End a Dark Persecution

With similarities to Buddhism, Falun Gong involves doing 5 meditative exercises and living according to the principles of truthfulness, compassion, and tolerance. Watching the practice attract 100 million adherents, and fearing that the Chinese people preferred its traditional moral teachings to Communist ideology, on July 20, 1999 the then-leader of the Chinese Communist Party launched a campaign to eradicate Falun Gong.

To date, more than 4236 Falun Gong practitioners can be confirmed to have been killed through torture and abuse, although, because of the difficulty of getting information out of China, the true death toll is believed to be far higher. An unknown, yet what could be a terrifyingly large, number of Falun Gong practitioners have been killed for their organs. Many are still in prison and could be killed at any time.

For this reason, Zhu Xueye, a 53-year-old bridge engineer from New York, has been coming back almost every year over the past 19 years.

“In the first few years, we thought the persecution would end very soon, as it was so obviously wrong. We thought the world should be standing with us to end it very soon,” Zhu recalled.

Zhu hadn’t expected that the persecution would last for so long, until he realized that the CCP was silencing the world with money. Part of that money could be the “profit” from the live organ harvesting “industry.”

Zhu is very confident in the fact that many people have come to realize how cruel the persecution has been, and a tipping point for the Chinese Communist Party to collapse will arrive soon.