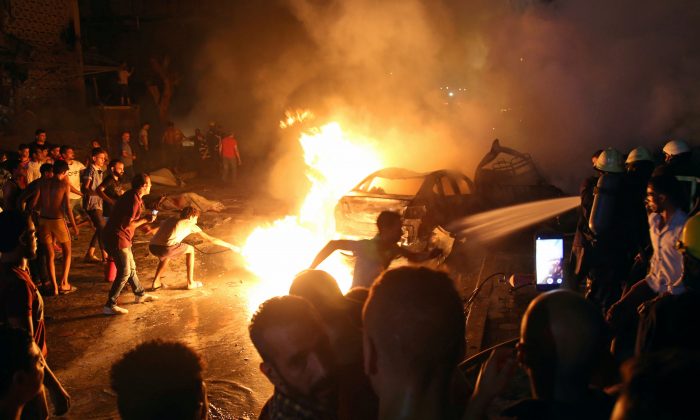 People extinguish a fire from a blast outside the National Cancer Institute, Cairo, Egypt on Aug. 4, 2019. (Shokry Hussien/Reuters)
Middle East

Nineteen Dead in Explosion Due to Cairo Car Crash: Ministry

A multiple-car crash on a Cairo street in front of Egypt’s main cancer hospital set off an explosion that triggered a fire outside the building, killing a total of 19 people, authorities said on Monday, Aug. 5.

The crash and the explosion also injured 30 others, the health ministry said, but it wasn’t immediately clear if any of the casualties were inside the hospital.

The Interior Ministry said a vehicle driving against the traffic—for reasons that were not specified—had collided with up to three others late on Sunday, causing the explosion on the Nile-side street, the city’s famous Corniche. At least 54 patients were evacuated to other hospitals while the fire was later brought under control.

Egyptian Liverpool forward Mohamed Salah offered his condolences to the families of victims and those that were injured.

“My full support and condolence to families of the victims and those injured in the explosion of the Oncology Institute,” the celebrated player wrote on Twitter.

The blast damaged the hospital’s main gate and several patient rooms and wards, according to a statement from the Cairo University. Its Medical School uses the institute as an educational facility.

Television stations on Monday morning broadcast footage of shattered windows and doors. The health ministry did not say if hospital patients or staff were among the casualties.

There was no immediate explanation as to why the crash had caused such a large explosion and officials could not be reached for questions about possible sabotage or whether there had been any explosive materials at the scene.

The county’s top prosecutor ordered an investigation into the crash, according to the state-run MENA news agency.

“We heard an explosion and … the bank entrance glass was shattered everywhere,” said Abdel-Rahman Mohamed, a security officer at a bank at the opposite side of the hospital.

The health ministry said the injured were taken to different hospitals for treatment.

Health Minister Hala Zayed said in TV comments that unidentified body parts were being collected in body bags from the site of the explosion. It was also possible that some bodies had ended up in the Nile, she added.

The police quickly cordoned off the area of the crash. Civil defense workers were seen Monday morning removing debris as officials milled about, inspecting the hospital to determine the extent of the damage to the building.

The riverbank is close to Cairo’s Tahrir Square, which became known internationally as the scene of mass protests in the 2011 uprising that toppled autocratic President Hosni Mubarak.