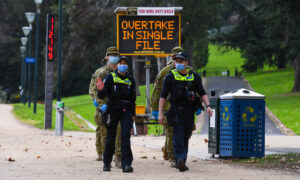 Victoria has announced nine more deaths from COVID-19, taking the state toll to 675 and the national figure to 762.

But there was some good news for the state on Sept. 7, with new case numbers dropping significantly to 41.

Monday’s figures come as Victorian small business rails against the government’s roadmap out of lockdown restrictions, with Melbourne under stage-four measures for another fortnight.

A broader state-wide reopening is still months away, but Victorian deputy premier James Merlino says the government is doing all it can to have the economy moving again in a COVID safe way.

Small Business and Family Enterprise Ombudsman Kate Carnell says owners are struggling under the weight of costs, including rent, equipment leases, loans and an accumulation of worker entitlements.

“What small businesses are telling us is that they are giving up,” she told Nine’s Today program on Sept. 7.

“For many of them, they are not going to be open until the end of November.”

Merlino said the worst thing the government could do for business was open up and then a few weeks later reimpose restrictions because of a third wave.

“You’ve got to get the (infection) numbers down … and once we do that then we can have a much broader reopening of our economy,” he told ABC radio.

Melbourne’s stage four restrictions will remain for another two weeks, although from Sept. 14 the nightly curfew will start an hour later at 9 p.m. and run until 5 a.m.

The lockdown will only lift on that date if the average number of new cases falls below five and there are fewer than five unknown source cases.

All remaining restrictions will be removed when Victoria goes 28 days with no new cases, although masks will likely remain compulsory for some time.