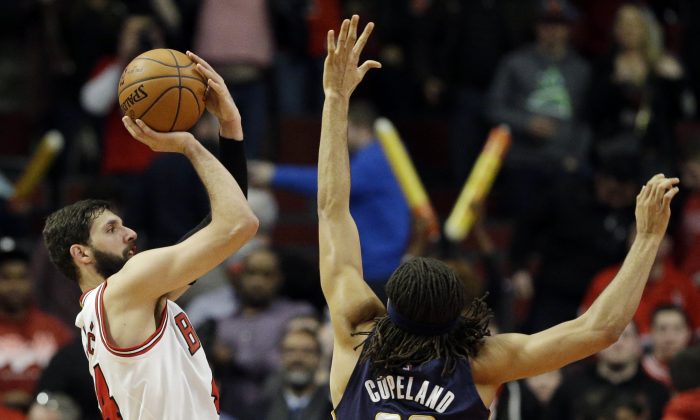 Nikola Mirotic, Stepping Up for Bulls, Could Win Rookie of the Year

European rookie Nikola Mirotic has slipped into the NBA’s Rookie of the Year conversation due to a stellar stretch of games that started at the beginning of this month.

As an example of how impactful Mirotic has become, he leads the league in the most points per game in the fourth quarter since March 1. His 9.5 points in the final quarter per game tops LeBron James (8.5) and Russell Westbrook (8.3), two MVP candidates.

Mirotic, 24, has seen his minutes jump dramatically in March, from a high of 19.1 (December) to 31.4 over the month so far. Coach Tom Thibodeau prefers to rely on veterans but Mirotic’s savvy and surprising versatility has prompted Thibs to play Mirotic at both forward positions, especially with injuries to Taj Gibson and Joakim Noah, and the non-emergence of fellow rookie Doug McDermott.

“He’s a basketball player,” Thibodeau told ESPN earlier this season. “He can shoot the ball, he can pass the ball, he can rebound the ball. He’s improving a lot defensively. Just the way he studies in general, to know what our opponents are doing, to know who the opponents are, their strengths and weaknesses, the things that he’s trying to take away, I think it’s all good.”

Mirotic started off the month with an 11-23, 29 point game on March 1, though the Bulls lost. Other key contributions include a 26-point outing against Oklahoma City where Mirotic shot 16 free throws, and the Bulls won; and a 28-point, 8 rebound effort in a win over Charlotte.

“Right now this is my chance to show what I can do; I don’t want to stop,” he told the Chicago Tribune.

“I want to keep building, keep working hard, because I know I can play much better. I am working a lot on my body and my strength, especially on playing defense in the low post, controlling more rebounding. It’s really fun, too. I really am going through a beautiful moment.”

Andrew Wiggins has been the frontrunner for Rookie of the Year since Jabari Parker went down with an injury, but Mirotic is pushing hard for the award. Mirotic’s traditional stats (9.7 points, 5.0 rebounds a game) aren’t as good as Wiggins’ (15.8 points, 4.3 rebounds a game) but Mirotic is playing fewer minutes and has better advanced stats, such as Player Efficiency Rating.

Mirotic has been billed as having nice range for a big man, and can shoot the three, but he’s a dismal 31 percent this season. In March, he’s jacking up 6.5 attempts a game and only making 1.6 of them, although the fact that he keeps shooting helps space the floor for the Bulls, particularly when Mirotic plays power forward.

The downward spiral of 3-point efficiency also coincides with the Bulls using Mirotic much more. Along with his jump in minutes, he’s shooting 15 times a game, way up from the 5.5 attempts he was averaging before this month. He’s scoring 32 percent of the Bulls’ points when he’s on the floor in March.

Mirotic would do well to stick more to his strength of catching the ball and shooting. He’s converting much better from behind and within the arc on these attempts, as opposed to pullups, according to the NBA’s camera-tracking system. At the same time, his pump fakes and drives produce scores of free throws–he’s shooting almost eight a game this month.

Yet another fact that helps Mirotic in the ROY race is that his Bulls are playoff-bound, while Wiggins’ Timberwolves are on of the worst teams in the league. Nerlens Noel, perhaps the other strongest contender, is also on one of the worst teams in the league, the Philadelphia 76ers. A lack of team success does not ROY contenders, though, as seen from Michael Carter-Williams of the Sixers winning last season.

At the same time, both Wiggins and Noel are playing well down the stretch, and are making their case for the award, as is Elfrid Payton of the Magic. It will be interesting to see who wins.