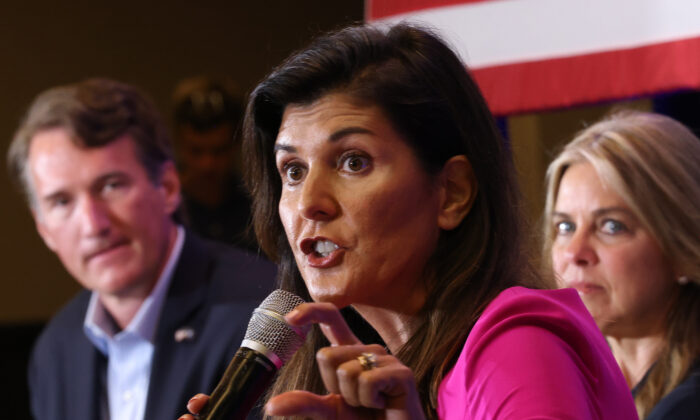 Nikki Haley, former U.S. Ambassador to the United Nations, has served up a kind of Christmas present to the nation in the form of a new comprehensive policy book, issued by her organization Stand for America, serving up conservative solutions for our nation’s many challenges—domestic and foreign.

Conservatives get a bad rap that they just say “no.” That they’re against everything but never clear what they are for.

Haley is one conservative that cannot be accused of not having a broad vision and not being forthcoming in sharing it.

It’s all here in “American Strength: Conservative Solutions Worth Fighting For.”

Latest Gallup polling shows just 24 percent of Americans are satisfied with how things are going in their country.

Recent polling from Pew Research shows only 24 percent of Americans say they trust their government to do the right thing “always” or “most of the time.”

The only thing Americans seem to agree on these days is dissatisfaction with their government and the state of affairs in their country.

Trust in government has not exceeded 30 percent since 2007. The last time it exceeded 50 percent was in October 2001, after the nation unified behind President George W. Bush’s effort to respond to the horrible terrorist attack on our nation on Sept. 11, 2001.

Per Pew, data reporting trust in government started in 1958, when the National Election Study first began asking the question. Those years from the late 1950s to the early 1970s were the last time, except for that brief moment in October 2001, 50 percent or more of Americans surveyed said they trust their government to do the right thing. Subsequently, it all went downhill.

What characterizes the years from the late ’60s/early ’70s up until the present is vast expansion of government power and intrusion into the lives of citizens. In other words, the more government goes where it doesn’t belong, the more confidence and trust that citizens feel in their government deteriorate.

Only when we were attacked, when government was the focus of what is clearly its job—national defense—did trust get back above 50 percent.

The flow of information from the economic and cultural fronts in the nation radiates troubling news.

Inflation is surging for the first time in over 30 years. National debt is growing to dangerous levels, equal to the size of our whole national economy with projections from the Congressional Budget Office that it will get much worse.

Our entitlement programs—Social Security and Medicare—have severe projected financing problems that make it impossible to continue without major reform.

Culturally, family and marriage are collapsing. Birthrates are at historic lows, and surveys show Americans of ages where families are formed indicate low interest in having children.

America needs conservative leadership to get us back on track with policies driven by traditional American values of limited government.

“American Strength: Conservative Solutions Worth Fighting For” serves up the blueprint.

I was honored to write the chapter on Overcoming Poverty and Building Long-Term Wealth.

But I am in distinguished company with leaders such as Ken Langone, founder of The Home Depot; Sens. Tim Scott and Pat Toomey; former House Speaker Newt Gingrich; Pastor John Hagee; Dennis Prager; and others, covering the full gamut of domestic and foreign policy

The USA is badly in need of a 21st-century conservative makeover.

Nikki Haley and Stand for America serve up the vision and the plan.