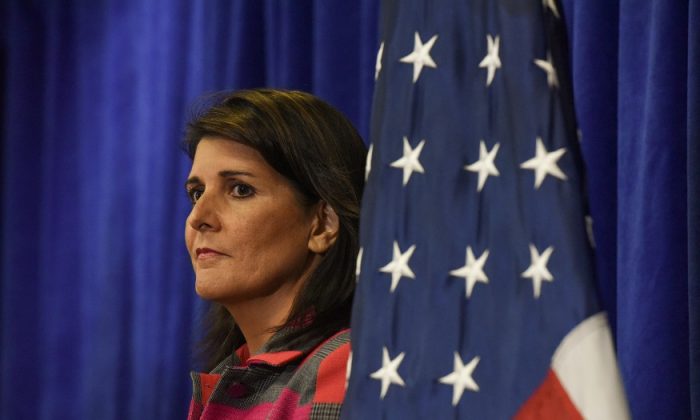 Former United Nations ambassador Nikki Haley has slammed prominent Democrats for their silence on leftist protesters who pulled down the American flag that hung over an Immigration Customs Enforcement (ICE) facility and replaced it with a Mexican flag along with a defaced “Blue Lives Matter” flag.

The protest at the ICE detention center near Denver, Colorado, on July 12 was organized by a collection of local socialist, Marxist, and communist organizations, along with other groups opposed to current U.S. border policy, or even to borders themselves.

“There are no words for why the Democrats are staying silent on this,” Haley wrote on Twitter on July 14. “If this is your way to winning an election, fire your strategist. This is disgusting. Love your country. And if you don’t like what is happening then tell the members of Congress to get to work and fix it.”

There are no words for why the Democrats are staying silent on this. If this is your way to winning an election, fire your strategist. This is disgusting. Love your country. And if you don’t like what is happening then tell the members of Congress to get to work and fix it. https://t.co/lHYQSHnNup

Denver is one of 10 cities nationwide where raids by ICE officials targeting criminals were set to to start on July 14.

Photographs and videos posted to social media show the flags being changed to the sound of applause and cheers as a crowd of hundreds looked on outside the facility in the city of Aurora, which forms part of the Denver metro area.

Protestors on @ICEgov property just pulled down the American flag and replaced it with the Mexican flag. The group by the doors is growing. Though most protestors are still on the street. pic.twitter.com/X2waaFMEOW

Sen. Ted Cruz, R-Texas, said on Twitter that all the Democrats in the 2020 presidential race should be asked a simple question: “Do you agree with the ICE protestors taking down the American flag & replacing it with a Mexican flag?”

The predictable result of the 2020 Dems’ radical open borders policies. Every Dem presidential candidate should be asked the hard Q: “Do you agree w/ the ICE protestors taking down the American flag & replacing it with a Mexican flag?” They’ll want to virtue-signal “yes,” but…. https://t.co/H3ItUp3GP0

Presidential hopeful and former Colorado Gov. John Hickenlooper faced that question in an interview over the weekend, reported Fox.

“I remember when people were burning the flag in protest of the Vietnam War,” he said, after indicating personal respect for the flag. “The amazing thing about this country is we’re really one of the few places on Earth where that level of freedom of speech is still protected. “I might not approve of it, but I think that freedom is something that we as Americans should recognize and say, hey, that’s part of our core freedom.”

Pressed as to whether the protesters’ actions were wrong and divisive, he responded: “I think there are better ways to unite us. There’s no question about that.”

The protest, which was dubbed the “March to Close Concentration Camps,” called for the closure of overflowing detention centers at the U.S.-Mexico border that are trying to process unprecedented numbers of asylum claims from migrants trying to get into the country. The protesters were also calling for all those being held to be immediately granted entry to the United States under the strapline, “Let Them All In.”

President Donald Trump confirmed on July 12 that ICE deportations will begin on July 14 and will focus on removing criminals. When asked why he was giving advance warning about them, he said, “There’s nothing to be secret about.”

“ICE is law enforcement. They’re great patriots. They have a tough job. Nothing to be secret about. If the word gets out, it gets out. Because hundreds of people know about it. It’s a major operation,” Trump told reporters before boarding Marine One on July 12.

The operation, which will target at least 2,000 illegal immigrants, will affect 10 major cities across the nation, unnamed current and former homeland security officials told The New York Times on July 11.