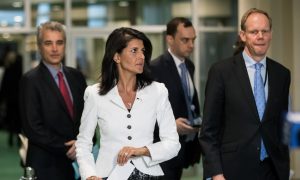 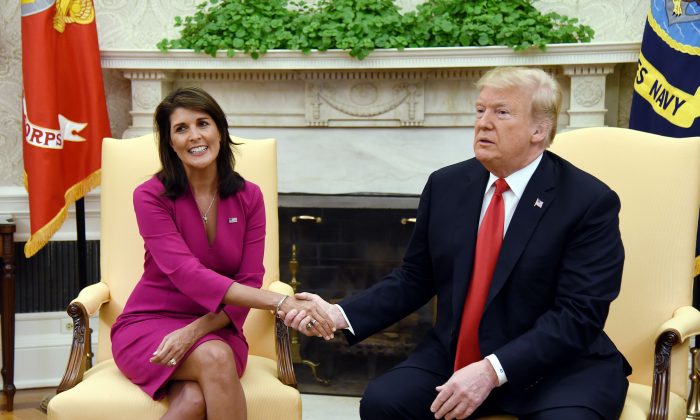 Former U.S. Ambassador to the United Nations Nikki Haley said Americans should be proud of President Donald Trump on the things he has done on the nation’s foreign policy on Oct. 4, ahead of a fundraiser in New York where she will attend as a special guest.

Haley made the comments during an appearance on Fox News, saying that the United States is “strong again” due to Trump’s decisions on foreign policy issues.

“If you look around the world, President Trump has a record every American should be proud of,” Haley told the news broadcaster.

“In the Middle East, the ISIS caliphate has been destroyed, and we’ve stopped handing billions in cash to Iran that it used to fund terrorism. The North Korean regime is no longer testing long-range missiles. America is once again treating the Cuban dictatorship like the pariah it is, and Maduro’s days are numbered in Venezuela.”

Her comments come ahead of the Trump Victory Committee’s Fall Retreat, a fundraiser hosted by the Trump campaign and the Republican National Committee (RNC) over this weekend. She will be attending as a special guest alongside Sen. Cory Gardner (R-Colo.), Donald Trump Jr., and Kimberly Guilfoyle.

“I’m happy to partner with the RNC supporting President Trump’s reelection, and I look forward to doing more for his campaign in the next year,” she said.

Since departing from her role in the Trump administration last year, Haley joined Boeing’s board of directors and launched her own policy group “Stand for America.” According to the website, the group aims to raise awareness about and combat domestic “socialist schemes of higher taxes, burdensome job-destroying regulations, government-run health care, and unsecured borders.” Meanwhile, it also aims to fight to stop the influence of socialist and communist regimes internationally.

She continued to face speculation over a 2020 challenge for the presidency despite denying it last year.

“I will say this, for all of you that are going to ask about 2020. No, I am not running for 2020,” Haley said in October last year announcing her resignation. “I can promise you what I will be doing is campaigning for this one. So, I look forward to supporting the president in the next election.”

In August, she denied “false rumors” that she would replace Vice President Pence on the 2020 ticket.

“Enough of the false rumors. Vice President Pence has been a dear friend of mine for years. He has been a loyal and trustworthy VP to the President. He has my complete support,” she said.

Enough of the false rumors. Vice President Pence has been a dear friend of mine for years. He has been a loyal and trustworthy VP to the President. He has my complete support. ❤️🇺🇸 pic.twitter.com/waPyQjC8Eb

Although Haley has expressed her support for the president, she has also shown that she is not afraid to criticize the president.

In August, she reacted to one of Trump’s Twitter posts mocking a robbery at Rep. Elijah Cummings’s (D-Md.) house, saying that “this is so unnecessary.”