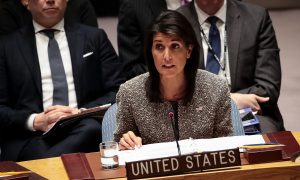 Nikki Haley Criticizes Those in Trump Administration Obstructing Him: ‘The President Was the Choice of the People’
0
Share Now
TelegramFacebookTweetEmailTellMeWeReddit
Copy Link 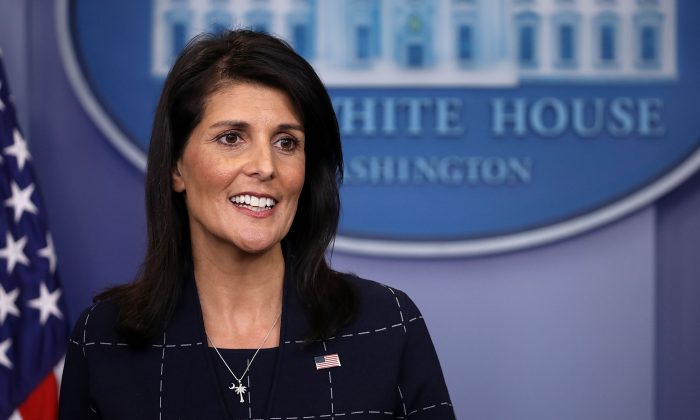 Nikki Haley, the former U.S. ambassador to the United Nations, this week attempted to play down rumors that she is setting her sights on replacing Mike Pence to become vice president on the Republican ticket in 2020.

Haley denied the accusations in an appearance on Fox News to promote her new memoir, “With All Due Respect: Defending America with Grit and Grace,” which was published on Tuesday, Nov. 12.

“I will tell you, it’s amazing how this vice president stuff still keeps coming up,” Haley said.

“The vice president and the president are a great ticket together,” she continued. “They’re solid. Solid enough that they’re going to win together.”

Haley claimed “there is no truth whatsoever” in rumors she is gunning for Pence’s position. She added, “I think Mike is great for that job and I think that he’s the right partner for the president.”

Haley previously brushed off the same rumors in August in a published statement on Twitter.

Enough of the false rumors. Vice President Pence has been a dear friend of mine for years. He has been a loyal and trustworthy VP to the President. He has my complete support. ❤️🇺🇸 pic.twitter.com/waPyQjC8Eb

“Enough of the false rumors. Vice President Pence has been a dear friend of mine for years. He has been a loyal and trustworthy VP to the president. He has my complete support,” she wrote late August.

Her comments came as former Republican strategist Steve Schmidt made an appearance on MSNBC’s “Morning Joe,” where he claimed Haley “wants to be vice president on the Republican ticket in 2020.”

“I think Mike Pence is probably hanging out back there thinking, ‘Hey, I’ve got a 1 in 365 chance at picking the day that Trump’s going to dump me from the ticket and put her on,'” Schmidt said.

He added that Haley “would serve [Trump’s] immediate political interests in a way that Pence can’t.”

Trump meanwhile dismissed the claims during an interview with Fox Business on Nov. 13, saying, “You can’t break up a team like that.”

“Nikki Haley represented us so well, and our country so well. I love Nikki, and there’s places for Nikki, and Nikki’s future is great, but Mike Pence is the person, 100 percent,” he told interviewer Maria Bartiromo.

The former U.N. ambassador also said this week she believes Trump is truthful and said she never doubted his fitness in office.

She was asked by “Today’s” Savannah Guthrie: “It’s been out there, and you worked in this administration. Did you ever have any doubt about the fitness of this president?”

“I never did,” Haley told the host.

Haley was then questioned about the president’s truthfulness.

“Savannah, I talked to him multiple times, and when I had issues, he always heard me out. I never had any concern on whether he could handle the job, ever,” Haley said.

When Guthrie asked her more questions, Haley said, “Yes, in every instance that I dealt with him, he was truthful, he listened, and he was great to work with.”

The 47-year-old left the Trump administration at the end of 2018. Haley said that the ambassador position had been the honor of a lifetime, but felt like she needed to step aside after serving six years as the governor of South Carolina and almost two years as the U.N. ambassador.