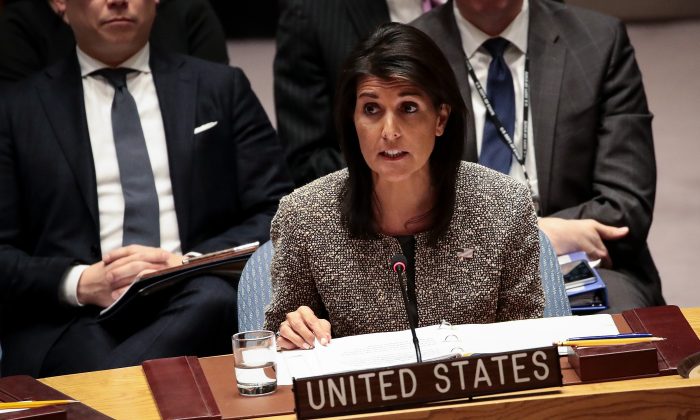 Nikki Haley Criticizes Those in Trump Administration Obstructing Him: ‘The President Was the Choice of the People’

The Irving Kristol Award is “the highest honor conferred by the American Enterprise Institute” for “exceptional intellectual and practical contributions to improve government policy, social welfare, or political understanding,” according to AEI’s website.

In her speech, Haley focused on America’s current situation and America’s role in the world.

Haley recalled words of President Calvin Coolidge who said on the 150th anniversary of the signing of the Declaration of Independence:

“Amid all the clash of conflicting interests, amid all the welter of partisan politics, every American can turn for solace and consolation to the Declaration of Independence and the Constitution of the United States.”

Haley believes that the values and principles like equality before the law, freedom, inalienable rights, are bestowed on human beings. They are “outlined” by the Declaration of Independence, and “the Constitution established them as a system of government.”

Haley said, “If … countries could live peacefully pursuing their interests; there would be more to recommend the United States retreating from the world.”

To justify her point, Haley talked about her experience when she spent time in the United Nations Security Council, where “Some of its most powerful members not only don’t share American values; they actively work to defeat them.”

While working at the UN Haley was able to see things that most Americans do not have a chance to see; like the suffering of a South Sudanese refugee woman whose baby was thrown into fire by soldiers; the suffering of Venezuelan families due to food shortages, or to negotiate “with representatives of a Chinese regime that is building a surveillance state that would horrify Orwell.”

“When the cameras were off at the UN, ambassadors from all parts of the world made it clear to me, they envy our ability to live and speak freely. They admire our principles, And they depend on us to lead the world in accordance with our values,” Haley said.

This experience made her appreciate the principles and values America is built upon and believe that they are “profound gifts… that we have received as Americans.”

When talking about the situation in America today, Haley said that American society has succumbed to victimhood and oppression politics. “The left claims that America was founded not in freedom, but in oppression.”

“But when we retreat into identity and grievance politics, we make the choice for victimhood over citizenship. By constantly blaming others, we reject personal responsibility for ourselves, our families, and our communities,” Haley said.

As an example, Haley pointed out a flaw in the current U.S. immigration system.

“Immigration is a source of American strength,” said Haley, if it is carried out in accordance with the rule of law and American principles. “It must be a two-way street. ”

Haley also criticized her former colleagues in the Trump administration, “who believed that the best thing to do for America was to undermine and obstruct the president.”

“The president was the choice of the people, in accordance with our founding charter. No policy disagreement with him, no matter how heartfelt, justifies undermining the lawful authority that is vested in his office by the Constitution,” Haley said.

Despite the criticism she expressed, Haley was optimistic as to America’s future because the “sacred principles” outlined in The Declaration of Independence and The Constitution “anchor our nation” and “show us the way forward.”