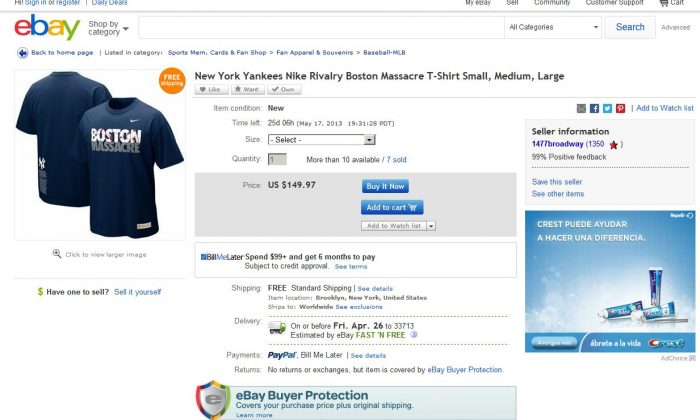 A screenshot shows the eBay page of the 'Boston Massacre' T-shirts in question.
Boston Marathon

The T-shirts had nothing to do with last week’s incident but were in reference to the Revolutionary War-era British attack on civilians in Boston. ABC News reported that the shirts were made to commemorate the rivalry between the Boston Red Sox and the New York Yankees.

Specifically, the shirt pertains to the Yankees’ sweeps of the Red Sox in 1976 and 2006 in the playoffs. Yankees fans have come to refer to the sweeps as “Boston massacres.”

But a spokesman with Nike said the shirts were pulled apparently to avoid controversy.

ESPN reporter Darren Rovell also confirmed the shirts are being pulled. “Nike says it has now pulled all ‘Boston Massacre’ T-shirts out of its outlet stores,”  he tweeted.

The shirts, however, are readily available on eBay, including one listing for $149.97 on Monday.