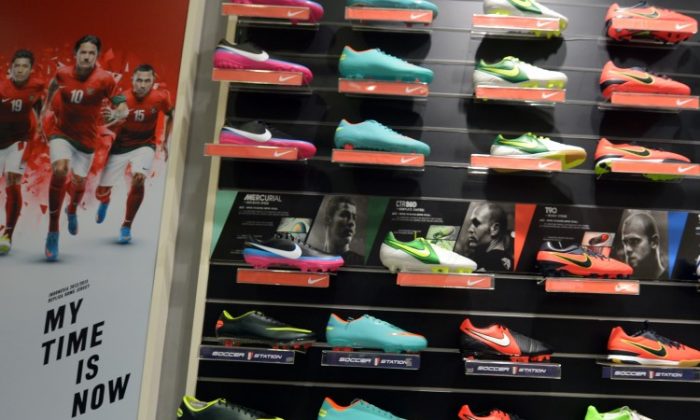 This picture taken in Jakarta on Jan. 15, 2012 shows Nike shoes displayed at a shop in Jakarta. (Adek Berry/AFP/Getty Images)
World

Nike is being accused of paying local Indonesian military personnel to show up at factories and intimidate employees to work for less than the country’s minimum wage.

Nike factory workers in the city of Sukabumi, located in western Java, told the Australia Broadcasting Corporation (ABC) this week that they were forced to sign a petition that supported the factory in saying it should not have to pay them wages that are in accordance with a new Indonesian wage law.

A video taken by a mobile phone shows a man standing over the workers, telling them: “You all have to sign it.” The video was viewed by the ABC after it was given to the broadcaster by a woman who wished to remain anonymous.

The woman and some others had resisted signing the petition. “We got summoned by military personnel that the company hired to interrogate us and they intimidated us,” she said.

“The first thing that scared me was his high tone of voice, and he banged the table,” she said. “And also he said that inside the factory there were a lot of military intelligence officers. That scared me.”

Wages have recently been a contentious issue in Indonesia and have prompted mass protests.

ABC reported that there are at least six other Nike factories that have applied for exemption from the minimum wage law. If the factory got its exemption, workers would get paid $3.70 per day instead of $4 under the new law.

Activists say that after rent and transportation to work, workers can afford only one meal per day under Nike’s proposed wages.

But on Tuesday, it appears that the factory will pay its workers the new minimum wage, reported the Jakarta Globe, citing Jim Keady, the director of the Educating for Justice workers’ rights group.

“I’m very happy for the workers in the factory. They are getting the justice they deserve,” he told the paper.

“Now we have to move forward case by case, factory by factory, and make sure that in all 40 [Indonesian] Nike factories, the 171,000 workers get what they deserve,” he said, adding that he spent most of Tuesday investigating another Nike factory in the city of Serang regarding improper labor practices.

Earlier, Keady told the Globe that 18 trade union officials at the Nike plant in Sukabumi “were asked to sign what they believed was a sign-in sheet for the luncheon” they had been invited to. Nike officials then “fraudulently attached [the signatures] to a document that stated the signatories agree to the factory management’s requests to be exempt from the new minimum wage,” he said.

Keady said his group has mainly investigated shoe-manufacturing plants, but he told the paper it will begin to look into Nike apparel factories.