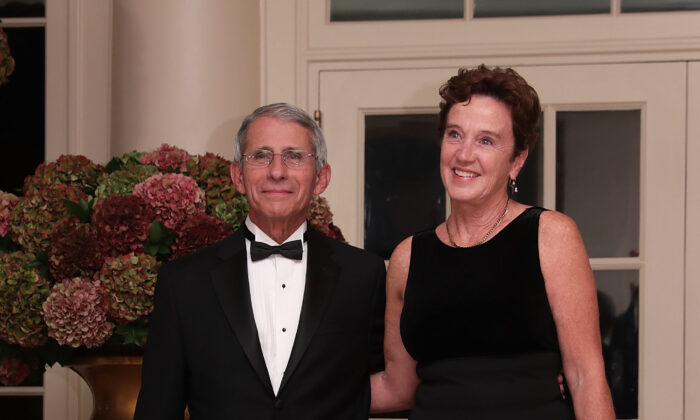 Open the Books is asking a federal court to force the National Institutes for Health (NIH) to comply with Freedom of Information Act (FOIA) requests to provide employment and compensation details for Christine Grady, the health agency’s chief bioethicist and the wife of Dr. Anthony Fauci.

Open the Books, a Chicago-based nonprofit government watchdog, is the nation’s largest private repository of information on government spending.

The foundation has filed thousands of FOIA requests and obtained data on more than $6 trillion in federal spending, the official checks of 49 of the 50 states, and the pay and pension information for 25 million government workers.

Grady is listed on the NIH website as “Senior Investigator” and “Chief of the Department of Bioethics at the National Institutes of Health Clinical Center.” Her title is currently listed by the U.S. Office of Personnel Management as “Social Science” with a pay level of $238,970, according to data compiled by Open the Books. The current top pay rate for federal government executive-level officials is $226,300.

Grady’s husband, Fauci, is director of the NIH’s National Institutes for Allergies and Infectious Diseases and the chief medical adviser to President Joe Biden.

Fauci receives $456,028 in annual salary compensation, making him the highest-paid employee on the federal payroll. His salary exceeds those of the president, the vice president, the heads of federal departments, senators and representatives, and the justices of the Supreme Court.

“Dr. Anthony Fauci out earns the President. His wife, Christine Grady, out-earns the Vice-President. When Fauci retires, he’ll retire on the largest federal golden parachute pension in history,” Open the Books President Adam Andrezjewski told The Epoch Times. “And all of that, our auditors at OpenTheBooks.com didn’t get from Fauci’s employer at NIH. We had to file FOIAs with other federal agencies to put the information together.

“The Fauci Family financials are buried deeper than the presidential safe place.”

Open the Books filed in its April 8 FOIA request that it was seeking “all employment contracts, modifications, and addendums” for Grady since her promotion to her present position. The FOIA also requested “all confidentiality agreements/documents, conflicts of interest waivers or documents, ethics disclosures, and financial interest and/or economic interest disclosure documents.”

Finally, the FOIA request sought a copy of Grady’s current official job description. All federal employment positions are required by federal law and regulation to have an official position description that describes the specific duties and responsibilities for which the individual holding the position can be held accountable.

The NIH acknowledged on April 28 receiving the FOIA, which was the maximum of 20 days allowed by federal law for an agency to do so. The FOIA law also stipulates that agencies must make a final determination on whether they will provide responses to requests, but Open the Books told the court that the NIH had failed to do so by the May 26 deadline.

The nonprofit also told the court that the NIH had failed to advise it of its potential administrative remedies, and has produced none of the requested documents or explained which, if any, of the FOIA’s eight permitted exemption categories apply that would allow for the documents to be withheld.

As a result, the complaint asked the court to order the NIH to conduct a thorough search for all of the requested documents, to produce all such documents that aren’t subject to being withheld by a certain date, or to explain why doing so isn’t possible, to provide what is known as a Vaughn Index describing each withheld document and why it was withheld, and to pay Open the Books the legal costs of the litigation.

The Open the Books FOIA lawsuit (pdf) was filed in the U.S. District Court for the District of Columbia.

The NIH’s refusal to disclose basic information about Grady’s job comes amid continuing controversy sparked by The Epoch Times’ May 9 report that hundreds of the health agency’s officials, scientists, and researchers have for years been receiving secret royalty payments from undisclosed private firms.

“We estimate that up to $350 million in royalties from third parties were paid to NIH scientists during the fiscal years between 2010 and 2020,” Andrzejewski told reporters in a telephone news conference on May 9.

“We draw that conclusion because, in the first five years, there has been $134 million that we have been able to quantify of top-line numbers that flowed from third-party payers, meaning pharmaceutical companies or other payers, to NIH scientists.”

“We now know that there are 1,675 scientists that received payments during that period—at least one payment. In fiscal year 2014, for instance, $36 million was paid out and that is, on average, $21,100 per scientist,” Andrzejewski said.

“We also find that during this period, leadership at NIH was involved in receiving third-party payments. For instance, Francis Collins, the immediate past director of NIH, received 14 payments. Dr. Anthony Fauci received 23 payments and his deputy, Clifford Lane, received eight payments.”

Dr. Lawrence Tabak, acting director of NIH, told Congress in May that the secret royalty payments present the appearance of a conflict of interest, but he claimed the agency has sufficient internal safeguards to protect against abuse.

Tabak’s predecessor as NIH director, Dr. Francis Collins, left the agency in December 2021 after leading it for a dozen years. He was then appointed by Biden as acting science adviser to the president. With an annual salary of $300,000, Collins is the highest-paid employee on the Biden White House payroll—itself the costliest ever recorded.