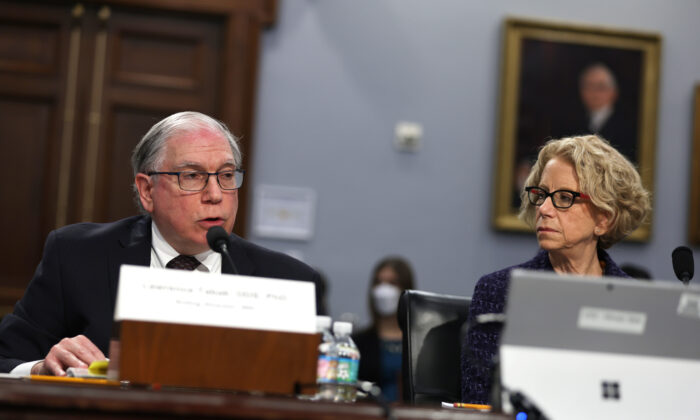 National Institutes for Health (NIH) officials failed to monitor EcoHealth funding awards properly and thus couldn’t fully understand the research being conducted by the nonprofit at U.S. taxpayers’ expense, according to investigators with the Office of Inspector General for the Department of Health and Human Services (HHS-OIG).

“Despite identifying potential risks associated with research being performed under the EcoHealth awards, we found that NIH did not effectively monitor or take timely action to address EcoHealth’s compliance with some requirements,” the HHS-OIG report said.

The report was made public on Jan. 25.

“Although NIH and EcoHealth had established monitoring procedures, we found deficiencies in complying with those procedures limited NIH and EcoHealth’s ability to effectively monitor federal grant awards and sub-awards [or] to understand the nature of the research conducted, identify potential problem areas, and take corrective action,” according to the report.

The new report is likely to intensify the controversy sparked in the wake of the COVID-19 pandemic in 2020 when it was learned that NIH has given millions of dollars in federal grants to EcoHealth Alliance, the New York-based health research nonprofit.

EcoHealth, in turn, awarded funds to the Wuhan Institute of Virology (WIV) in Wuhan, China, where extensive gain-of-function research was routinely conducted, including on COVID-19 and related coronaviruses.

Many U.S. health experts and members of Congress contend the COVID-19 virus leaked from the WIV and spread from there across the world. More than 1 million Americans and more than 6 million worldwide have died as a result of the virus. Chinese Communist Party (CCP) officials have stoutly refused to allow U.S. and international investigators the full access required to determine the origin and spread of COVID-19.

The OIG audit focused primarily on three NIH grants to EcoHealth totaling more than $8 million. At least $3 million of the federal funds awarded to EcoHealth since 2014 went to research involving WIV, and the nonprofit recently received a grant from the Department of Defense (DOD) valued at nearly $3 million.

The report further noted that “although WIV cooperated with EcoHealth’s monitoring for several years, WIV’s lack of cooperation following the COVID-19 outbreak limited EcoHealth’s ability to monitor its sub-recipient. NIH should assess how it can best mitigate these issues and ensure that it can oversee the use of NIH funds by foreign recipients and sub-recipients.

Also on Jan. 25, Sen. Joni Ernst (R-Iowa) introduced a bill to bar any federal funding from going to EcoHealth for any purpose, or to any subsidiary or other entity linked with EcoHealth.

The bill also provides that the Government Accounting Office, the investigative arm of Congress, will conduct an analysis of all federal funding that went to EcoHealth in the decade prior to 2023. The analysis is to focus on “the amount of federal funds awarded to EcoHealth Alliance, Inc. (directly or indirectly through grants, contracts, sub-grants, subcontracts, or any other type of agreement or collaboration) … that were provided, whether purposely or inadvertently, to (1) the People’s Republic of China; (2) the Chinese Communist Party; (3) the Wuhan Institute of Virology; or (4) any other lab, agency, organization, individual, or instrumentality” that is owned or controlled directly or indirectly by EcoHealth or any of the entities listed.

EcoHealth issued a lengthy statement that claimed the OIG report “did not find significant issues with EHA’s grant oversight and compliance, summarizing its findings as follows: ‘EcoHealth had steps in place to conduct risk assessments of its sub-recipients, and also had standardized checklists to document routine monitoring of its sub-recipients.'”

EcoHealth also said it “accepts OIG’s recommendations for how to ensure that sub-awards were compliant with Federal requirements; how to ensure compliance with sub-recipient monitoring and reporting; and how to comply better with certain public disclosure requirements associated with reporting sub-award funding.”

The nonprofit also said the OIG report noted that only 1 percent of its activities funded by NIH were disallowed, meaning that “put another way, the OIG found that EHA did comply with Federal requirements 99 percent of the time.”

The HHS-OIG report was originally sought by Ernst, who issued a Jan. 25 statement saying: “While NIH certainly shares in the blame, EcoHealth Alliance is ultimately at fault for failing to tell the world what was really going on at China’s Wuhan Institute. They are guilty of either complacency or a cover-up, or maybe a little of both. EcoHealth was paid millions, promising their hunt for bat viruses would protect the world from a pandemic … well, the world got a pandemic, and EcoHealth keeps getting millions.

“We can’t afford any more of EcoHealth’s ‘prevention’ efforts. That’s why we must permanently ban them from receiving taxpayer dollars ever again.”