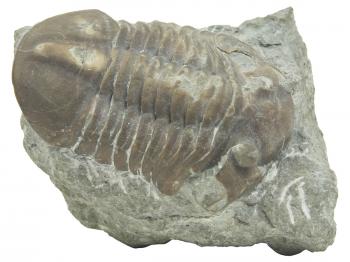 EXOSKELETON ENIGMA: Researchers have found that the extinction of the trilobite resulted from its inability to free itself from its own defense, its shell. (Photos.com)
Beyond Science

Night of the Trilobites Part I

In spite of the strength with which the evolutionist doctrine has been applied in contemporary biology over the last century, facts oblige one to doubt the validity of mutation and natural selection as the true driving force behind the origin of species.

The Enigma of Left-Handed Snails and Other Rarities

To some, the left-handed marine snail is one of the greater rarities with which nature delights us. Contrary to their significantly more common, right-handed brethren, the left-handed snail has a slight mutation, making the spiral of its shell inverted. This characteristic means that the can-opening claws of its fiercest opponent, the crab, lose their ability to break the snail’s shell so the crab can feast on the delicacy within.

According to evolutionist understanding, this inverted shell trait should lead to the gradual dominance of the left-handed snail, while the environmental factor (hungry crabs) will naturally weed out the weaker variety, resulting in a steady decline of the inferior right-handers.

However, in reality, left-handed snails constitute less than even 5 percent of the total snail species. This number has not increased over the long course of years and, mysteriously, evolution to this seemingly desirable trait has not taken place.

Now consider the trilobite, one of paleontology’s most prominent fossils. These marine arthropods began declining in number by the end of the Permian period, about 250 million years ago. Their relatively rapid extinction had been a mystery for scientists until recently.

Recent investigations have concluded that the key to understanding the demise of the trilobites resided in their inability to free themselves from their large shell, which they shed periodically during growth.

The irony in this case is that the very exoskeleton that served to protect the animals, in the end became their prison—their only escape route failed to open. But the inevitable end of the trilobite, as in many prehistoric species, is joined with another inescapable enigma: How is it that the very trait that brought extinction of a species, could be the same as that which allowed for their proliferation when they first emerged?

Examine some of the most recent advances in genetic investigations and you are faced with an enormous amount of “junk DNA”—which was presumed to be clear evidence for the different stages the human species experienced on its way through the evolutionary process.

However, the most obvious deductions can eventually be overturned in light of more exhaustive studies. The supposed evidence that all life forms on the planet share the same cellular code is no longer considered a viable argument to explain the connection of all species from a single origin.

It is simply no longer possible to believe that the Deoxyribonucleic acid molecule sprang forth in some instant, out of the earth, as if overnight. This in itself represents a dilemma, containing in it the enigma with which science still struggles.

Furthermore, the processes of mutation and natural selection—the driving forces behind evolution—have also demonstrated a multitude of problems that science remains unable to clearly explain. For example, the great majority of mutations are of a neutral or negative character in the history of the organism. Only one in every thousand has the possibility of benefiting a species.

C.H. Waddington, professor of animal genetics at the University of Edinburgh, believed the understanding that adaptation was random and mutational was an extremist view. He noted that mutations were such a rare occurrence that they appeared as little as once in a million animals, or once in a million lifetimes.

Add to this the work of Jeffery H. Schwartz, professor of Anthropology at the University of Pittsburgh, who affirmed that cells possess an army of proteins resistant to mutations. In light of this information, the “evolutionary machine” necessary to sustain the theory becomes highly improbable.

So if a real change occurred in a species, it follows that it should come about through considerably great steps rather than a few small mutations. This idea is seen coupled with recent investigations which demonstrate that for a true “adaptation” of the species to occur, it must be the result of an extreme environmental change.

Therefore, if the statistically complicated possibility that a successful mutation in a species indeed took place in history, it makes it even more difficult for us to clarify how this event could have possibly occurred so smoothly in millions and millions of species—whether aquatic, terrestrial, or aerial animal species, as well as insects, trees, shrubs, tubers, algae, and others—time and time again.