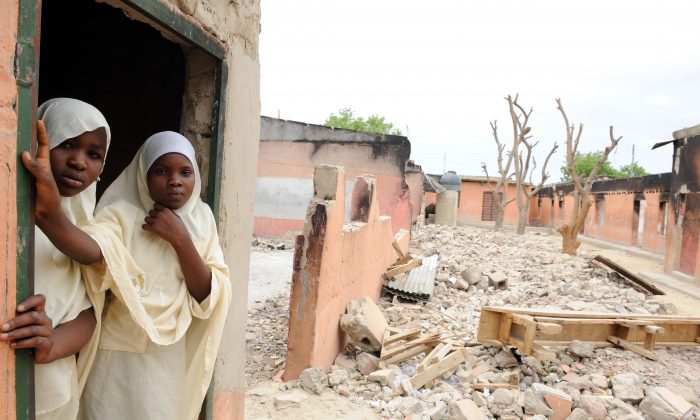 A female student stands in a burnt classroom at Maiduguri Experimental School, a private nursery, primary, and secondary school burnt by the Islamic terrorist group Boko Haram to keep children away from school in Maiduguri, northeastern Nigeria, on May 12, 2012. (Pius Utomi Ekpei/AFP/GettyImages)
Africa

At dawn on Feb. 10, a camp for displaced people in the northeast Nigerian town of Dikwa began stirring to life. Three unaccompanied young girls asking for shelter had arrived the day before, and spent the night with approximately 50,000 others who had fled the Islamist terrorist group Boko Haram. That morning, in the midst of a crowd of displaced Nigerians, two of the girls blew themselves up, killing 58 people and wounding scores. The third girl with bombs strapped to her body decided not to detonate, and was taken into custody.

The three girls are part of an appalling trend begun after a multinational coalition last year started pushing Boko Haram out of the territory it controlled in northeast Nigeria. Since June 2014, Boko Haram has used approximately 100 women and girls—some likely kidnapped—in terror attacks, in addition to its usual barbarisms.

Despite the violence, newly-elected President Muhammadu Buhari claimed in December 2015 that Nigeria has “technically won the war” against the group. As the attack on the Dikwa camp shows, however, his assessment was too optimistic.

Unless the Nigerian government and military undertake serious reforms and adopt a broader strategy that accounts for the various components of the Boko Haram phenomenon, the group will continue to be a threat, and likely even reconquer lost territory.

Buhari’s comments were most concerning because they suggest his administration may make the same mistakes as his predecessor, Goodluck Jonathan. During Jonathan’s tenure, Boko Haram seized chunks of lands in the northeast and routinely humiliated the Nigerian military in battle. It also carried out some of the globe’s worst terrorist atrocities—its infamous April 2014 kidnapping of 276 girls from a school in Chibok was only part of a campaign that made it the world’s deadliest terror organization that year.

Boko Haram metastasized into its virulent form in 2009, and since then it has been clear that Nigeria has not fully understood the nature of the group or the threat it poses. The government treated it primarily as a military problem, with little regard for the ideological component of the crisis, or the enabling environment in some parts of the north that allowed Boko Haram to flourish.

Boko Haram’s leadership, and at least portions of its foot soldiers, is motivated by the same sort of violent, exclusivist interpretation of Islam as is the Islamic State (ISIS) and most other prominent modern terrorist groups. In fact, in March 2015, Boko Haram officially joined ISIS and rebranded itself as the Islamic State’s West Africa Province. The extreme ideology peddled by Boko Haram must be discredited to genuinely defeat the terror group, something military force alone cannot do.

The military also cannot on its own address the political and social environment in northeast Nigeria, where Boko Haram was spawned, that likely makes locals more prone to radicalization. One of the pillars of Boko Haram’s philosophy and propaganda is grievance against the central government, which it accuses of persecuting Muslims. The northern part of the country has a history of Muslim-Christian violence and lags behind the south in many human development categories, likely amplifying the power of Boko Haram’s message.

The military’s activities often only reinforced the Boko Haram narrative, however. It routinely brutalized northeastern Nigerians, and in many areas was as feared as the terrorist group itself. This almost certainly drove more recruits into Boko Haram’s welcoming arms. Such brutishness also made locals far less willing to cooperate with the military, making it more difficult to gather intelligence and deny the group community support.

Buhari was swept into office largely thanks to his vows to aggressively and effectively fight Boko Haram and the corruption rotting the government and military. He has continued cooperating with the anti-Boko Haram multinational coalition that formed at the end of Jonathan’s tenure, and the results have been good. He also has been more willing to accept international aid, including from the United States, than was his predecessor.

Yet the fight against Boko Haram will be long and arduous. The coalition has been unable to root the group out of its lair deep in the Sambisa Forest in Borno State, and it is unclear if any progress towards discrediting the virulent ideology that is a major engine of Boko Haram’s violence has been made. Only when that happens will the Nigerian government be able to say that it has genuinely defeated Boko Haram.

Joshua Meservey is a policy analyst for Africa and the Middle East within the Douglas and Sarah Allison Center for Foreign and National Security Policy at The Heritage Foundation. Copyright The Daily Signal. This article was previously published on The Daily Signal.