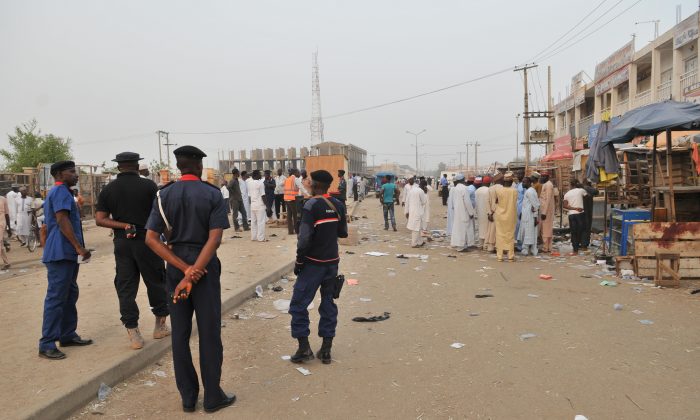 Security officers stand guard at the scene of an explosion at a mobile phone market in Kano, Nigeria, on Wednesday, Nov. 18, 2015. The suicide bomber exploded as truckers were tucking into dinner at the bustling marketplace where vendors urged them to buy sugar cane. At least 34 people were killed and another 80 wounded in Yola, a town packed with refugees from Nigeria's Islamic uprising, emergency officials said Wednesday. Later Wednesday, two more suicide bombers killed at least 15 people in the northern city of Kano and injured 53, according to police. (AP Photo/Muhammed Giginyu)
Africa

YOLA, Nigeria—The suicide bomber exploded as truckers were tucking into dinner at the bustling marketplace where vendors urged them to buy sugar cane. At least 34 people were killed and another 80 wounded in Yola, a town packed with refugees from Nigeria’s Islamic uprising, emergency officials said Wednesday.

The blasts were the latest by Boko Haram, Nigeria’s home-grown extremists whose 6-year insurgency has killed 20,000 and forced 2.3 million to flee their homes.

Boko Haram was named Wednesday as the world’s most deadly extremist group in the Global Terrorism Index. Deaths attributed to Boko Haram increased by 317 percent in 2014 to 6,644 compared to 6,073 blamed on the Islamic State group. Boko Haram pledged allegiance to IS in March and calls itself that group’s West Africa Province.

Wednesday’s explosions came as President Muhammadu Buhari pressed his campaign against Nigeria’s endemic corruption, blamed for hampering the fight against the insurgents. Buhari accused his predecessor’s national security adviser of stealing billions of dollars meant to buy weapons to fight Boko Haram, when soldiers had just a few bullets and the Islamic extremists were rampaging across northeast Nigeria.

Critics long have blamed corruption for the military’s failures, asking how the insurgents can be better armed than Nigerian soldiers despite an annual defense budget of more than $5 billion, supplemented last year by a loan of $1 billion.

Buhari ordered the arrests of several former high-ranking officials allegedly linked to fraudulent and fictitious arms contracts totaling $5.4 billion, one of his advisers, Femi Adesina, said in a statement.

“Thousands of needless Nigerian deaths would have been avoided” if the money had been properly spent, Adesina said.

The unending violence has torn apart Nigeria’s northeast. In the city of Yola, hit by a suicide bombing for the third time in as many months, relatives searching for missing loved ones converged on the two main hospitals.

“I couldn’t find them at the hospital so I had to come to the mortuary,” said a distraught Musa Adamu. He said his brother, Kamal, was selling sugar cane to truckers and his uncle had gone to look for him.

Adamu found both their bodies in the morgue.

State Department spokesman John Kirby said the U.S. condemns the bombings and renews its commitment to work with Nigeria and its neighbors to defeat Boko Haram and to address violent extremism in the region.

“We denounce the callous terrorist acts that have taken place repeatedly in Nigeria and other countries in the Lake Chad Basin and offer our condolences to the victims and their families,” he said. “Of course, those responsible for these crimes must be held accountable.”

Many Nigerians welcomed the order for the arrest of Sambo Dasuki, the former national security adviser accused of diverting billions that should have equipped the army.

“Beyond corruption, Dasuki should be charged for high treason: Men, women and children died because their armed forces could not defend them,” one angry Nigerian, D. Olusegun, tweeted.

Buhari ordered the arrest of Dasuki, a key adviser to former President Goodluck Jonathan from 2012, and other unnamed high-ranking officials mentioned in an interim report by a committee investigating arms procurement since 2007 that Buhari ordered after he took office in May.

Dasuki is accused of awarding “phantom contracts” to buy 12 helicopters, four fighter jets and munitions worth $2.9 billion that never were supplied, Adesina said. Buhari fired him in July.

In a statement, Dasuki said the allegations were “laughable” and that “I am not a thief or treasury looter as being portrayed.”

He said he has a November 2015 memo from the then chief of air staff acknowledging receipt of the jets and helicopters.

An October memo confirmed receipt of 250 kilograms of bombs and accessories costing $2.89 million with freight costs of $1.2 million, Dasuki said.

“It is not for me to go and find out whether the equipment was delivered or not. I am not the one keeping the inventories,” he said.

Dasuki insisted the presidential committee had never asked him to give evidence, though Nigeria’s intelligence agency, the State Security Service, has said that Dasuki refused to answer the committee’s questions.

Security agents said that was why they have been besieging Dasuki’s home in Abuja, the capital, despite a Federal High Court order allowing him to travel abroad for medical care. The court had allowed Dasuki bail after he pleaded innocent to other charges of money-laundering, involving more than $423,000 found in cash, and illegal possession of arms seized at two of his homes.

Dasuki said he was proud that in the final months under his watch Nigeria’s military ousted Boko Haram from its self-declared Islamic caliphate.

That offensive came as Jonathan faced elections. In the year before, soldiers fled before the extremists, allowing them to seize control of a large swath of northeast Nigeria. Soldiers told The Associated Press they were going into battle without food and armed with just 30 bullets each.

Dasuki, 60, had usurped the role of the Ministry of Defense in procuring weapons. A retired army lieutenant-colonel, Dasuki participated in every coup in Nigeria since the 1980s.